After India’s World Cup ouster, reports suggesting that a rift between Virat Kohli and Rohit Sharma has been doing rounds. 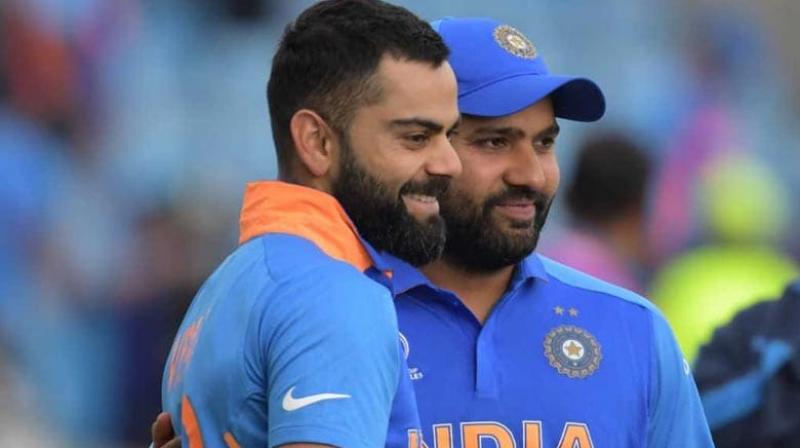 In a Sportstar column, Gavaskar shared why these rumours last longer than the careers of Indian cricketers Virat Kohli and Rohit Sharma. (Photo:AFP)

Mumbai: After India’s World Cup ouster following their 18-runs defeat against the kiwis, reports suggesting that a rift between Virat Kohli and Rohit Sharma has been doing rounds. Soon after the ouster, the reports got circulated, stating that there were two different camps – a Virat Kohli camp and a Rohit Sharma camp.

Additional reports stated, few seniors players were not happy to work with Ravi Shastri and his support staff. The reports also stated that BCCI might look for a split captaincy option.

The reports stated that the BCCI is aiming to change the ODI captain, that is, the unit is looking make Rohit as the ODI and T20 captain, while Virat Kohli will continue to lead the test team. Lastly, those reports also mentioned that the Indian captain and vice captain weren’t not seeing eye to eye anymore.

The rumours became so strong that some administrators got the opportunity to add further salt to injury. However, addressing the media in a pre-departure press conference before the West Indies tour, Kohli had clarified, “I have heard a lot of things from the outside, if the atmosphere was not right then we would not have been able to come on top of ODI.”

“In my opinion, it’s baffling. It’s ridiculous to read such stuff. We are feeding on lies and overlooking facts and creating fantasies and scenarios. Bringing personal lives into the picture is disrespectful.”

But will Kohli’s statement put an end to all the theories and rumours? Former Indian cricketer Sunil Gavaskar says that these kind of stories will go on for many decades. In a Sportstar column, Gavaskar shared why these rumours last longer than the careers of Indian cricketers Virat Kohli and Rohit Sharma.

In the column Gavaskar stated that, “Virat and Rohit can shout from the rooftops as much as they can but this story won’t end. Every time Rohit fails there will be those who will nod their heads knowingly and wink, hinting he deliberately got out.”

Moreover, the former Indian cricketer also indicated the most probable source of this kind of stories and why the media houses continue to publish these kind stories for many years.

“Whoever starts such stories is definitely not a well-wisher of Indian cricket. More often than not it’s a frustrated player in the squad who gives wings to stories like this. His envy and jealousy harm the team. Then of course it suits some administrators to play their own game of politics.

“For the media it’s manna from heaven and so while it can be suppressed when the cricket is on, the rest days between games is where the story gets fanned further. Virat Kohli and Rohit Sharma are professionals and they will put their heads down and go out to win matches for India but the story won’t stop even 20 years later,” former Test opening batsman Gavaskar stated in the column.