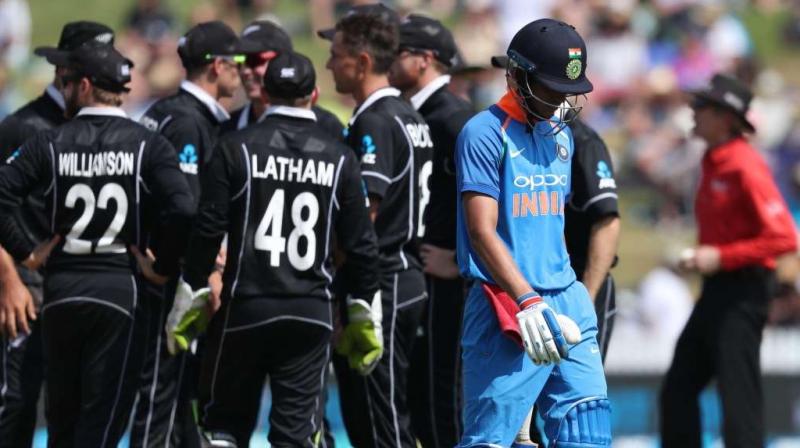 Manchester: Virat Kohli's India are two wins away from World Cup glory but fans are wary about New Zealand's pace attack and the threat of rain that looms over Manchester in the first of the semi-finals on Tuesday.

"I know India start as top favourites to win here but you never know. Kiwi pacers are lethal and can exploit the overcast conditions," Neeraj Kumar, an Indian student who travelled from Bradford, told AFP.

"But our pacers are also good. (Jasprit) Bumrah can run through their batting. Fingers crossed," the 22-year-old with an Indian tri-colour in hand and a painted face said.

Fit-again fast bowler Lockie Ferguson, with 17 wickets in seven games, is expected to return to the New Zealand side after missing the previous game with an hamstring injury. His pace partner Trent Boult has taken 15 wickets in eight matches.

India have lived up to their tag as one of the pre-tournament favourites, with opener Rohit Sharma leading the team's charge, becoming the first player to score five centuries at a single World Cup.

Paceman Bumrah has also been key to the team's success, with 17 wickets, and is an impressive "death-ball" bowler with his ability to bowl yorkers.

"If they have Lockie then we have Bumrah. It is a clear case of pace versus pace today," said Reeta Jain, an Indian fan who has come all the way from America with her husband.

"We will win for sure," she said with a smile and thumbs-up.

The sky above Old Trafford has been declared a "no-fly zone" for Tuesday, after a light aircraft flew banners containing political messages over Headingley on Saturday