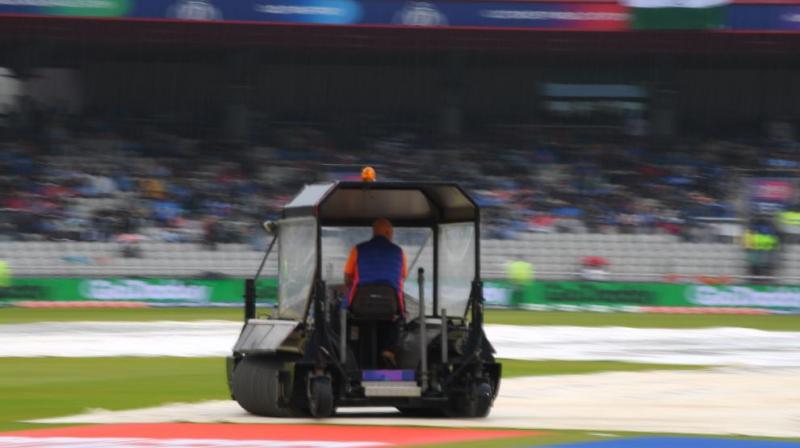 New Zealand will be hoping that aggressive bowler Lockie Ferguson regains 100 per cent fitness ahead of the match as Lockie will be providing the flying start for the team. (Photo: Cricket World Cup/Twitter)

Mumbai: New Zealand have won the toss and have elected to bat first because of the overcast conditions in the first semi-final match.

The toss was vital since the pitch is favouring the batsman, and all the teams have won all its five matches while batting first.

Coming to changes in the playing XI, for New Zealand, speedster Lockie Ferguson comes back after sustaining a hamstring injury and replaces Tim Southee. While, india have also made one change - They brought on Yuzvendra Chahal in place of Kuldeep Yadav.

10:55 pm: The final call has been taken by the officials. The match will resume tomorrow and New Zealand will continue their innings.

9:04 pm: The covers are coming off, we may get some good news soon. The rain has stopped.

It has been raining for quite some time now, and the Sun is finally out. We should have an official update soon.

46.2: Match has been paused due to heavy rain. Covers has been brought in to cover the pitch.

44.4: A daft shot by Colin De Grandhomme sends him back to pavilion off Bhuvneshwar Kumar's delivery.

43.1: Ross Taylor has scored his 50th fifty as he aims to take Kiwis post a challenging total.

29.6: Kane Williamson hits his fourth World Cup 50, but the question can he convert it to a big score?

28.2: Kiwis reach 100 as Kane Willaimson and Ross Taylor are in process of re-building the innings again.

15.5: Hardik Pandya has left the field with an apparent groin injury as Mayank Agarwal replaces him on the field.

The Kiwis have won one out of their seven World Cup semifinals. While, India have won three and lost three on other occasions.

During this World Cup, Rohit Sharma's strike rate has been 95.77 during the powerplays. Rohit who has amassed 647 runs in World Cup had a strike rate of 74.04.

Trent Boult has scapled wickets against India in ODIs than any other bowler since the last World Cup: 22 wickets from 12 games at 24.9.

Rampaging India will look to book its berth for the finals after having defeated Australia, Pakistan, South Africa, West Indies, Afghanistan, Sri Lanka and Bangladesh in their group stage matches. India are just one win away from entering the finals. India are currently placed at first, after winning seven games from nine matches (including one wash-out).

On the other hand, New Zealand will look to resume their World Cup campaign on track, after suffering three humiliating defeats at the hands of Australia, England and Pakistan. New Zealand will be hoping that aggressive bowler Lockie Ferguson regains 100 per cent fitness ahead of the match as Lockie will be providing the flying start for the team.

New Zealand are currently sitting at fourth, having won five out of their nine games, while losing the other three. New Zealand who are on 11 points need to back themselves in order to win their upcoming semi-final match against India to avail any chance of lifting the coveted trophy.

The match is scheduled to start at 3 pm IST on Tuesday. (July 9)

The match will take place at the Old Trafford.

Will #RohitSharma break #SachinTendulkar's record of the highest number of runs in a single World Cup edition today?#INDvNZ #DCSports #TeamIndia