The tournament, which will generate some 400 million pounds (USD 500 million) is key in funding the ICC's work in developing the sport. 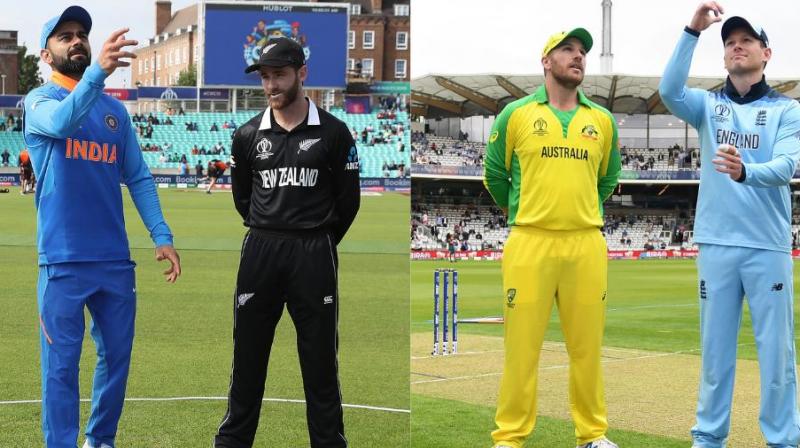 In the 2016-23 broadcasting cycle, of which the 2019 and 2023 World Cup are the key events, some 93 "associate" or junior cricket nations stand to receive 175 million pounds from the ICC, whereas India will get 320 million pounds alone. (Photo: ICC/Twitter)

Manchester: They may have each had some slip-ups along the way, but it is perhaps no surprise that cricket's three wealthiest nations -- England, India and Australia -- are in the semi-finals of the World Cup.

The tournament, which will generate some 400 million pounds (USD 500 million) in broadcast revenues alone, is key in funding the International Cricket Council's work in developing the sport.

Yet most of the money still finds its way to cricket's richest countries.

In the 2016-23 broadcasting cycle, of which the 2019 and 2023 World Cup are the key events, some 93 "associate" or junior cricket nations stand to receive 175 million pounds from the ICC, whereas India will get 320 million pounds alone.

While the 'Big Three' are able to strike lucrative domestic broadcasting deals as well, teams based in poorer local economies such as South Africa and the West Indies are struggling to compete.

They face the constant threat of players quitting international cricket to pursue more lucrative careers in one of the numerous Twenty20 franchise competitions that have sprung up following the huge success of the Indian Premier League.

When promising South Africa fast bowler Duanne Olivier announced he was halting his Proteas career to join English county side Yorkshire, it prompted West Indies captain Jason Holder to call in February for the ICC to introduce a minimum wage for international cricket.

South Africa captain Faf du Plessis, speaking last week before his side ended their World Cup campaign in the group stage, said: "Looking at the one-day side, your players that will move on from the Proteas would potentially move on to the T20 circuit.

"That will become the biggest issue for us to try and stay away from for all players. And that's including myself." New Zealand, the fourth-placed qualifier for the semi-finals, were quicker than most to adapt the realities of the modern game by allowing top players to feature in the IPL, although they were helped by the lack of a clash with their domestic season.

They are proof of how a team boasting a relatively small playing base can, with good talent identification and organisation, remain competitive on the world stage.

But for countries trying to manage larger cricket populations against a background of economic weakness, the situation remains complicated.

Cricket South Africa is one of a number of national boards who are simply unable to offer their players anything like the money available in T20 leagues or county cricket.

And while du Plessis would be delighted if Holder's call was acted upon, he was pessimistic about the chances of a major financial shift anytime soon.

"Sri Lanka, New Zealand, West Indies and Pakistan: I think all of us fall into the same category, like maybe your second-tier nations and then you get your top tier which is a little bit different.

"West Indies are a great example. They probably are the worst off and that is why they have lost so many players to the circuit.

"I think England, Australia, India will always be the higher-paid nations.

"Obviously the currency is very strong but also the packages that they (their players) get paid are obviously a lot different to your smaller nations.

"If that changes, it will be amazing for the rest of the world, but I think it's a long, long way from happening."