The 20-year-old was ruled out of the match before Afghanistan took to the field to defend their below-par total of 172. 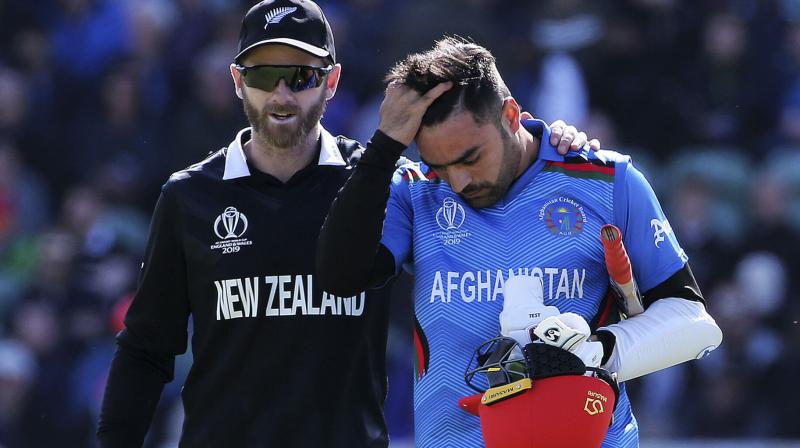 Rashid was off the field throughout the match as he failed two concussion tests. (Photo: AP)

London: Rashid Khan failed two concussion tests after being hit on the helmet by fast bowler Lockie Ferguson on Saturday during an ICC World Cup match between Afghanistan and New Zealand at the Cooper Associates County Ground in Taunton.

The 20-year-old was ruled out of the match before Afghanistan took to the field to defend their below-par total of 172. Rashid was dismissed by Ferguson for a four-ball duck in the 34th over.

Rashid was off the field throughout the match as he failed two concussion tests. He did not bowl as a precaution and will be under observation until tomorrow. He was seen uncomfortable while holding his forehead in the balcony, ESPNcricinfo reported in their live commentary. He never came back to the field after he sustained a concussion.

Afghanistan, however, have six days off before their next match against South Africa. That may be enough of a break in between games for Rashid to recover and resume his place as Afghanistan's strike bowler, commentary added.

New Zealand paceman James Neesham was the pick of the bowlers as he returned with figures of 5/31, while, Ferguson was the second best bowler of the day with 4/37. The Kiwis chased down the target inside 33 overs, with skipper

Both Afghanistan and South Africa will be seen in search of their first win on June 15 at Sophia Gardens in Cardiff.