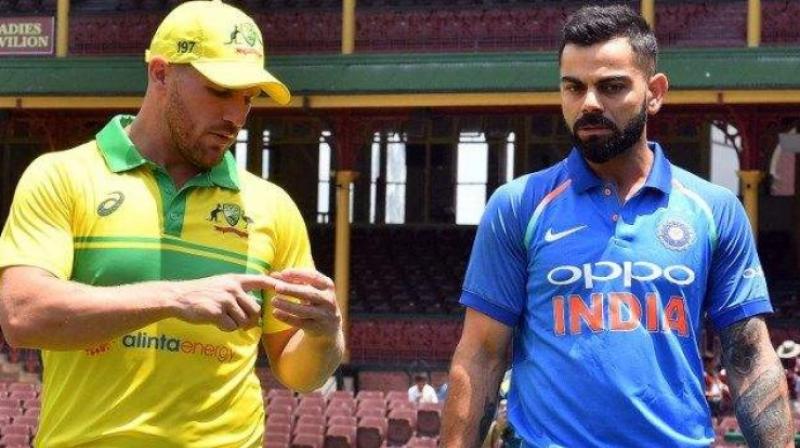 Batting first, India hammered 352 for five, and then, bowled out Australia for 316 in exactly 50 overs at the Oval. This is India's second win in as many matches.

India have out-batted, out-bowled and out-fielded the defending champions here at the Oval.

46.6: WICKET! Bumrah gets his third as Pat Cummins nicks the ball to safe gloves of MS Dhoni.

44.5: WICKET! Coulter-Nile departs! Bumrah gets his second as skipper Kohli grabs the catch by moving left from deep mid-wicket.

40.4: WICKET! Maxwell falls to Chahal again. Maxwell had no other choice, but to go after Indian bowlers. Jadeja takes a superb catch to dismiss Maxwell.

39.6: WICKET! Bhuvneshwar strikes twice in a single over. He gets the wicket of Marcus Stoinis.

39.4: WICKET! Bhuvneshwar strikes as he gets his first wicket of the match. He traps Smith on the pads.

36.4: WICKET! Bumrah does the job for India once again as he breaks the partnership by dismissing Usman Khawaja. Bumrah bowls Khawaja by using his extra pace. Australia in trouble as the required run rate is soaring.

24.4: WICKET! Chahal gets the wicket of David Warner. Warner flicks the ball to Bhuvaneshwar Kumar for an easy catch.

13.1: WICKET! Skipper Aaron Finch departs! Finch was miles short of the crease when Kedar Jadhav threw ball at the bowler's end where Hardik Pandya was waiting. He collects it cleanly and whips the bails off.

6.0: A slow start for Australia as they have managed to gather only 18 runs from six overs. Bumrah and Bhuvneshwar have been magnificent in their initial overs.

49.5: WICKET! Kohli misses chance to hit boundary as he goes back after scoring 82.

45.5: WICKET! Pandya falls two short of 50 as he give away an easy catch to Aaron finch.

43.2: Pandya hits two consecutive sixes in a row as 50 runs partnership comes up

22.3: WICKET! Rohit tries to flick the ball over Carey but instead gives away an easy catch.

19.2: India reaches 100 as Dhawan and Rohit looks to add more runs to the board.

15.2: India brings reaches 80 to form nearly 100 runs opening partnership between Rohit and Dhawan as the pair fetched 31 and 46 runs respectively.

The match is scheduled to start at 3 pm IST on Sunday. (June 9)

The match will take place at the Oval.

India started their World Cup 2019 campaign with a superb bowling performance against the Proteas. Yuzvendra Chahal and Jasprit Bumrah were they key elements of India's bowling attack. Jasprit Bumrah was brilliant with the new ball and Yuzvendra Chahal showed his expertise in the middle overs. The duo was succesful in restricting South Africa to 227.

Rohit Sharma's century steered the Men in Blue to victory as India chased down the target successfully with 15 balls remaining. The only concern for India will be the form of Shikhar Dhawan. The left-hander has failed to make an impact in the tournament.

Dhawan and Kohli are yet to register a big score in the mega-event. The Indian batting line-up will also consist of KL Rahul, MS Dhoni and Hardik Pandya. India will be hoping to post a competitive score on the board while Pat Cummins and Mitchell starc will be hoping to curb India from doing so. The duo is expected to rely on short balls to exploit the Indian batting order.

The Australian team was tested by West Indies in their previous match. After losing early wickets, the Aussies were successful in posting 288 on the board. Australia's batting order will be led by David Warner and Steve Smith.

Amid boos, both the players have the potential to turn the tide in Australia's favour. Mitchell Starc, Pat Cummins, Nathan Coulter-Nile and Adam Zampa are expected to make a formidable bowling attack.

India vs Australia ICC World Cup 2019 is going to be played at the Kennington Oval, London. There has been some rain around in London but the weather is expected to favorable on match day.