ICC World Cup 2019: Players to watch out for - Steve Smith

Smith produced a knock of 215 runs in Ashes 2015, becoming the first Australian to score a double ton at Lords since the Second World War. 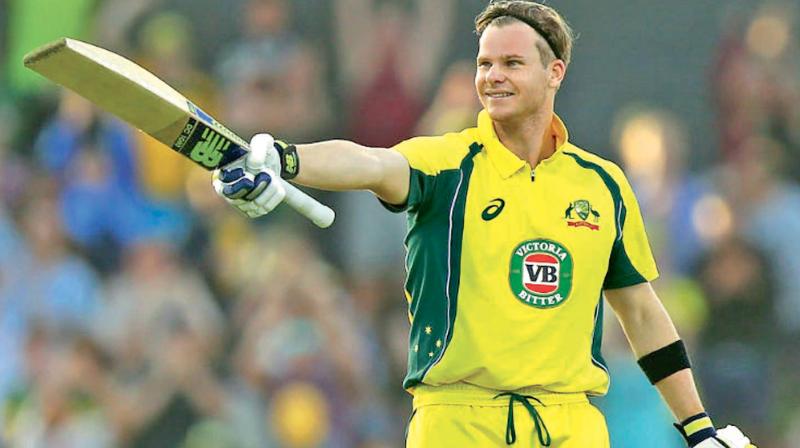 Australia emerged as winners of the 2015 World Cup, with Smith scoring an unbeaten knock of 58 in the final against New Zealand.

Mumbai: The world saw glimpses of Shane Warne when a 21-year-old leg spinner Steve Smith made his debut in a Test Series against Pakistan. The inclusion of Smith in the Australian team was predominantly due to his leg-breaks and his ability to bat down the order. Little did the world know that Smith was going to evolve as one of the iconic batsmen of the modern era?

Smith gained a lot of recognition due to his performances in the 2013-14 season. It all started with a ton against India and it was no looking back for Smith then. Scoring his fifth test hundred, Smith plundered India by scoring 162 runs in the first test match at Adelaide.

The world saw an evolved Steve Smith, utilizing his unorthodox batting technique and establishing his place as a prime batsman of the Australian Cricket Team. Smith’s batting skills slowly started to overshadow his bowling, and his focus deviated from leg-breaks to cover drives. Smith’s unconventional stance and his ability to shuffle the crease offered him more time to play his shots.

Smith was acclaimed as a batsman in the 2013-14 Ashes series. He was successful in scoring his maiden century in the third test match at Perth, helping Australia to put 326 runs on the board. He was also awarded Man of the Match for steering Australia to a win, from a point where half of the team was dismissed at the score of 97. Eventually, Australia was triumphant by 281 runs.

Smith has showcased his potential with the white ball as well. Smith was in astonishing form in the 2015 World Cup, steering Australia to the final by scoring five consecutive half-centuries in the tournament. After getting dismissed early on 5 in his maiden World Cup game against England, Smith achieved the feat of scoring five successive half-centuries against Afghanistan, Sri Lanka, Pakistan, India and New Zealand.

Australia emerged as winners of the 2015 World Cup, with Smith scoring an unbeaten knock of 58 in the final against New Zealand.  He was the highest run scorer for Australia in the tournament, gathering 402 runs at an average of 67.

Despite England retaining the Ashes in 2015, Smith achieved an astonishing feat in the second test match at Lords. Smith produced a knock of 215 runs in the first innings, becoming the first Australian to score a double ton at Lords since the Second World War. Smith’s innings helped Australia to post a mammoth score of 566 on board. Australia eventually won the match by 405 runs, with England collapsing on a mere score of 103 on the fourth day of the match.

Smith was initially snapped up by Pune Warriors in 2013, with Rajasthan Royals acquiring him in the following year due to the expiration of Pune Warriors. One of his best IPL knocks came in 2016 when he was briefly associated with Rising Pune Giants for a year.

Smith scored 101 runs in just 54 balls, weaving 5 sixes and 8 fours in his innings. Smith missed out on playing in the previous IPL due to his ball-tampering controversy but came back strong in IPL 2019 by scoring an unbeaten knock of 73 runs against Kolkata Knight Riders.

Smith is expected to be the talisman for Australia in World Cup 2019, and he has already started to show his class by scoring 89 runs in the practice match against New Zealand.  With an average of 61.38 in tests, Smith is considered as one of the best test batsmen and currently is sitting fourth on the test player rankings. His expertise is not confined to test cricket.

Smith has scored 3431 runs in 108 ODI matches at an average of 41.84 and has also contributed with the ball at times. Smith’s bowling career has certainly faded away, as he has managed to take only 27 wickets in his ODI career.