The 60-year old Dev said that India will definitely reach the semi-finals stage of the tournament. 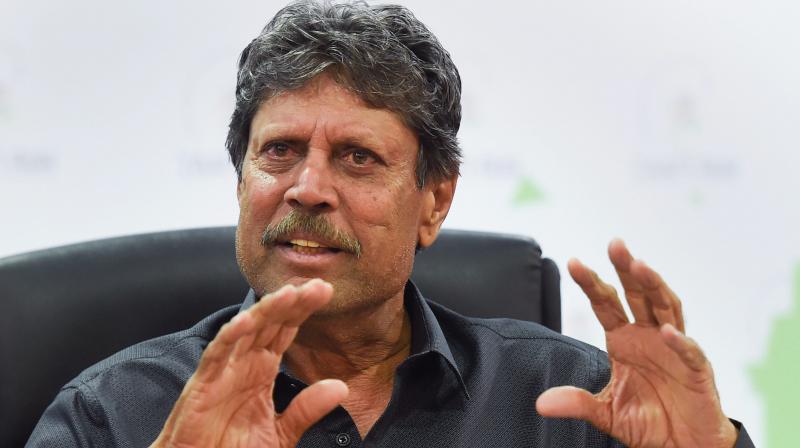 Dev was touted as the greatest fast-bowling all-rounder that India has ever produced. He took a total of 253 wickets in the 223 ODIs and he was seen praising the current bowling attack that India possesses. (Photo: PTI)

Dubai: Former Indian cricketer Kapil Dev said the Indian team with its right balance of youth and experience along with the "unmatchable" duo of Virat Kohli and MS Dhoni will definitely reach World Cup semifinals but will need luck and strong team performance to progress beyond that.

"India has a great combination of youth and experience. In a way, they are more experienced than the other teams. They have the right balance - four fast bowlers, three spinners and they have Virat Kohli and MS Dhoni," International Cricket Council quoted Kapil Dev as saying on Thursday.

"Dhoni and Kohli have done extremely well for India. Both of them are unmatchable," he said.

The 60-year old Dev said that India will definitely reach the semi-finals stage of the tournament.

"I think India will definitely finish in the top four. After that, it will be really difficult. After the semifinals, a stroke of luck alongside personal and team performance will determine who goes forward," he said.

Dev was touted as the greatest fast-bowling all-rounder that India has ever produced. He took a total of 253 wickets in the 223 ODIs and he was seen praising the current bowling attack that India possesses.

"The four fast bowlers we have are fantastic. The English conditions will help them swing the ball. The players like Mohammad Shami and Jasprit Bumrah can bowl 145kph, with swing and pace," Dev said.

India's current all-rounder Hardik Pandya has been in impressive form for Mumbai Indians in the ongoing Indian Premier League (IPL). There have been comparisons between both Pandya and Dev, but the veteran Dev was seen playing down the comparisons and said pressure should not be put on Pandya.
"You should not put pressure on Hardik Pandya. He has enough talent, let him play his natural game. I don't like anybody being compared to anyone because that puts pressure on that player," he said.