Suryakumar Yadav shines but Jadhav walks away with accolades 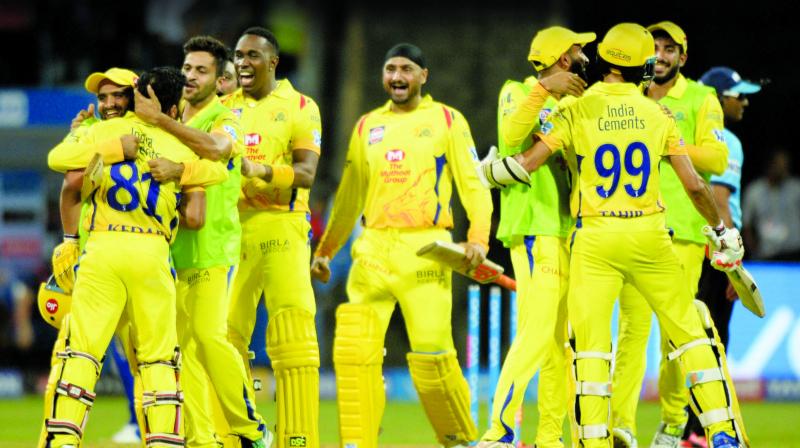 Kedar Jadhav retired hurt on 14 after aggravating a hamstring injury but came back limping after Dwayne Bravo put his team in a winning position with a 68 off 30 balls, which included 40 runs in two overs.

The state rivals put up a great show for their new IPL franchises, but Jadhav emerged a hero as he steered CSK home on one leg. But he aggravated his hamstring injury and may miss out on some IPL action.

But his effort was overshadowed by his Maharashtra counterpart Kedar Jadhav’s last over heroics for CSK. Jadhav retired hurt on 14 after aggravating a hamstring injury but came back limping after Dwayne Bravo put his team in a winning position with a 68 off 30 balls, which included 40 runs in two overs. Bravo departed on the last ball of the penultimate over leaving CSK seven more to get with just one wicket in hand.

Jadhav, who has been struggling with a hamstring issue off late and missed few international games also, returned to the crease to take strike in the last over bowled by Mustafizur Rehman. The Pune batsman didn’t panic even after three dot balls and with a fine-leg up he produced a ramp shot on one leg that went for six. The remarkable shot under pressure tied the scores and with the field coming in, he pierced the next delivery between cover to seal the deal in incredible style with a boundary.

His winning effort of an unbeaten 24 didn’t silence the crowd entirely as a sizeable number of CSK fans had turned up at the stadium to celebrate the return of their team after two years. The wild celebrations continued on local trains filled with CSK fans.

But Jadhav’s valiant effort might have done more harm to his hamstring and he may miss out on some IPL action now. “I am happy psychologically, but physically I am hurt. I might not play for the next couple of weeks. Bravo gave us the opportunity to give a shot at it. I could not run and I told Immy (Imran Tahir) I will take all six balls. With six balls and seven runs, they were bowling same lengths and I just needed a big hit,” Jadhav said at the post-match presentation ceremony.

Bravo, who played his best-ever winning knock with the bat, praised Jadhav for his grit. “(We) can’t forget Jadhav, who came back and showed a lot of fight and a lot of guts. To hit that six is a special moment,” Bravo said after the match.

Despite the nerve wracking loss, Mumbai Indians will be pleased for new comers Surya and Kishan for giving them a great platform after losing the openers early.

The duo shared a 78-run stand for the third wicket. Mumbai Indians eventually finished with 165/4, with the Pandya brothers, Krunal (41) and Hardik (22) sharing an unbroken stand of 52 runs.

“He showed great maturity and experience to bat well under pressure with young Ishan Kishan to give us the lift with the bat after we struggled early on. The wicket was fresh and the ball was skidding to trouble batters,” Mumbai Indians’ coach Mahela Jayawardene said in praise of Surya. “It was a good game. Barring those three overs, we executed our plans well,” he added. Surya, after showing promise in the league phase of T20 in Mumbai with a couple of thirties, scored 63 in qualifier 1 and followed it up with an unbeaten 90 in the final to set up the title win for North East Panthers Triumph Kings.

On Saturday, despite the loss of early wickets and with the ball doing a bit, Surya started with crisp boundaries and effortless picked up a six over square leg. His timing was immaculate and just when he threatened to take the game away from the visitors with three back-to-back boundaries off Shane Watson, he timed a pull straight to square leg in the same over.