The stalemate in the Spanish capital derby left leaders Real three points ahead of Barcelona, who lost to Malaga later on Saturday. 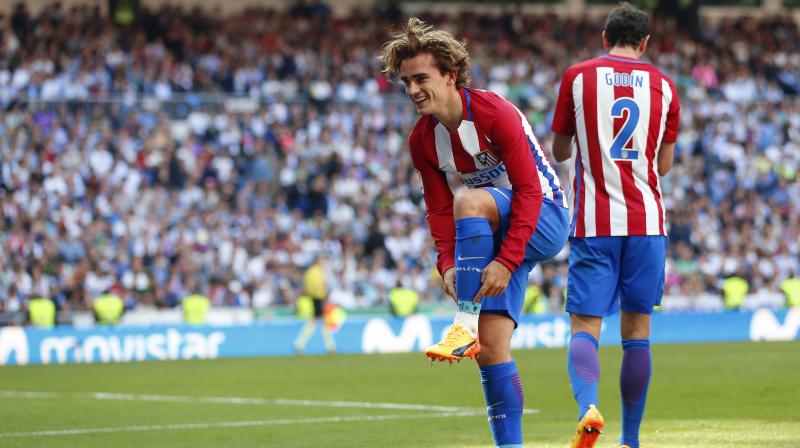 Antoine Griezmann used his left foot to drive home a perfectly placed through ball by substitute Angel Correa to equalise at the Santiago Bernabeu in the 85th minute. (Photo: AP)

Griezmann used his left foot to drive home a perfectly placed through ball by substitute Angel Correa to equalise at the Santiago Bernabeu in the 85th minute.

Pepe put Real ahead in the 52nd, when he shook off his marker and headed Toni Kroos' free kick just inside the far upright.

But Real failed to press for another goal and Griezmann capitalised on their complacency.

"We can't be happy today," Madrid coach Zinedine Zidane said. "We could have easily taken the three points. The league title will go down to the wire."

The stalemate in the Spanish capital derby left leaders Real three points ahead of Barcelona, who lost to Malaga later on Saturday. Real also has a game in hand, but face matches against Barcelona and fourth-place Sevilla over the final two months.

Atletico, who added the draw to wins at Real in the last three league campaigns, stayed in third place, 10 points behind.

Real were on the brink of taking a major step toward its first league title in five years.

That was until Correa, who had gone on in the 61st for Saul Niguez, saw the sliver of space between Real defenders Nacho Fernandez and Dani Carvajal. Correa slid the ball forward between the pair, and Griezmann did the rest, slotting his shot past Keylor Navas for his third goal against Real in Atletico's red-and-white.

"We know we are a strong team, with a great mentality. It was tough, but we got the draw thanks to a great pass by Angelito," Griezmann said. He dedicated his 23rd goal in all competitions to his daughter who turned one on Saturday.

While highlighting the effort by his defence, Atletico coach Diego Simeone lauded Griezmann for his "passion, work ethic and ability to move in the box."

But the best praise came from the rival manager.

"You can't wonder how to stop him," Zidane said about Griezmann. "You just have to admit he is a great player."

Atletico can turn with confidence still high back to the Champions League, where they host Leicester on Tuesday in the quarterfinals.

Real's six-match winning streak ended. They travel to Bayern Munich for their European quarterfinal on Wednesday.

It was a vintage performance by Simeone's Atletico. His team bent but never broke under the steady pressure by the star-studded Real.

Besides Griezmann and Correa's moment of inspiration, Atletico's solid performance was based on the superb saves of Jan Oblak.

The Slovenian goalkeeper turned back two clear chances by Karim Benzema, and another two by Cristiano Ronaldo and Gareth Bale.

And when Ronaldo finally beat him in the first half, defender Stefan Savic hustled back to clear his goal-bound strike with his head.

Zidane's team can barely be blamed for letting up near the end, given that Atletico had only mustered shots by Griezmann and Fernando Torres that Navas had dealt with.

That was when Correa connected with his forward to flip the match on its head and cast doubt on Real's march toward the trophy.

"We played a great game against a great rival, but we dropped our guard for one moment," Real midfielder Casemiro said.