Virat Kohli says he would rather finish than entertain

Kohli produced a batting masterclass in 1st T20I match against WI, smashing a career-best 94 not out to help India chase a 200-plus target. 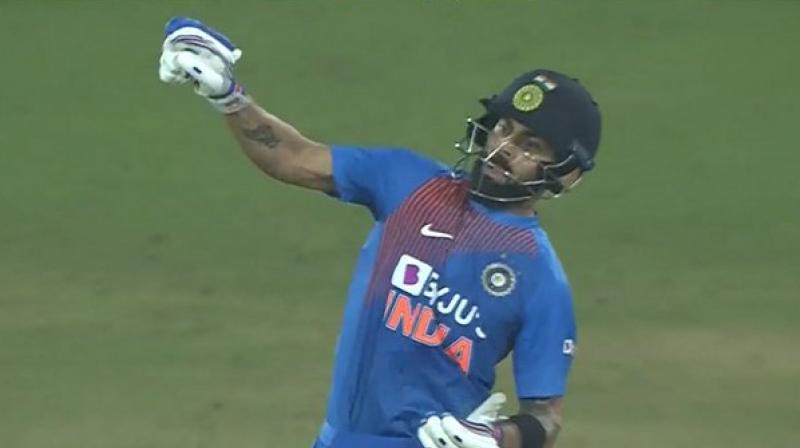 India’s captain Virat Kohli says his priority is to help India win matches than just play ‘slam-bang cricket’ for the sake of entertaining the crowd in the Twenty20 game. (Photo:Twitter)

NEW DELHI: India’s captain Virat Kohli says his priority is to help India win matches than just play ‘slam-bang cricket’ for the sake of entertaining the crowd in the Twenty20 game.

Kohli produced a batting masterclass in Friday’s T20I match against West Indies, smashing a career-best 94 not out to help India chase a 200-plus target with eight balls to spare.

The elegant right-hander, who clobbered six sixes, went run-a-ball in his first 20 deliveries before exploding to plunder 74 off the last 30.

“I’m not someone who comes to the stadium wanting to entertain people hitting the ball in the air. I want to get the job done,” Kohli told broadcaster Star Sports after India won the series opener in Hyderabad by six wickets.

“Within that, if I get an opportunity to hit sixes, I will. But the aim is not to play slam-bang cricket.

“I think my role in this team is to bat long. Myself or Rohit (Sharma), one of the guys has to play till the end because our strength is usually striking in the later half of the innings, and our strike rate goes up.”

Kohli relies more on his timing than muscle power to hit those sixes and the 31-year-old sees no reason to try and overhaul his technique.

“It’s about contributing to your team and making the team win.”

Kohli’s knock was an innings of two halves with the right-hander trying to hit too hard initially before rediscovering the sublime timing which makes him the top ranked batsman both in tests and one-dayers.

“I thought I’m not a guy who slogs the ball. I’m more of a timer, so I’m going to rely on my timing. And then the pitch was good enough for me to go through the line of the ball and just play my shots.”

Despite his assertions, Kohli’s knock was not totally devoid of entertainment, and at one point he mimicked Kesrick Williams’ box-ticking celebration after hitting the bowler for a six.

“It happened to me in Jamaica when he got me out, so I thought I’ll tick a few in the notebook as well,” Kohli said.