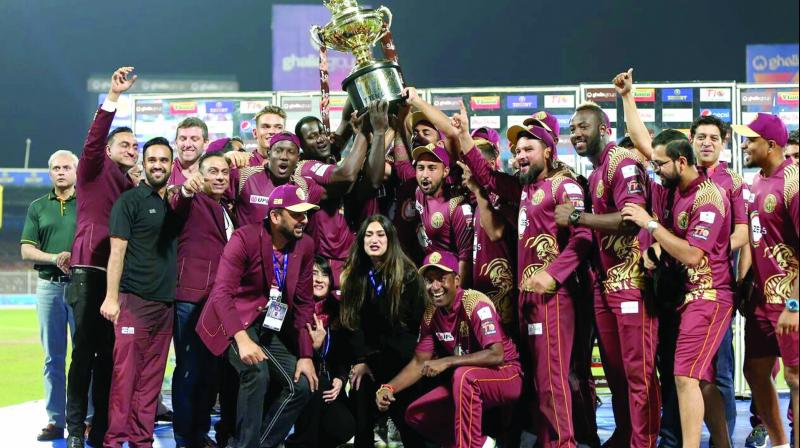 Northern Warriors won the second season of the T10 League at the Sharjah Cricket Stadium on Sunday.

The popularity of Twenty20 leagues across the world has paved the way for even much shorter format — the T10 League — and it is also finding its footing in the cricketing world.

Though, the ten-over format has never been used as a professional league form until 2017, when Nawab Shaji Ul Mulk, the chairman of Mulk Holdings launched the T10 League as the world’s first formal franchise tournament in which some of the world’s best cricketers played in six teams.

Eight teams — Kerala Knights, Punjab Legends, Maratha Arabians, Bengal Tigers, Sindhis, Rajputs, Northern Warriors and Pakhtoon — were drawn in to two groups in the 2nd Season of the T10 League that took place at the Sharjah Cricket Stadium from November 21 to December 2.

“I think this is the perfect format to re-invent cricket and introduce it to the Olympics. All participating players are enjoying it. It is a quick fire format and a big test for bowlers. The format also provides the batsmen an opportunity to show their skills. I myself had some great knocks out there in the middle.” said Paksitan’s star batsman Shahid Afridi, who represented the Pakhtoon in the 2018 edition of the T10 League at the Sharjah Cricket Stadium.

This translates to an average match score of 224 runs per match, while average innings score crossed 112 runs in 60 balls – or nearly two runs per ball – the highest in any form of cricket.

More than 73.2 percent of the total 2,914 runs came through boundaries while the highest team score touched the 132-run mark and the highest individual score was 69.

The T10 League has been endorsed by the Emirates Cricket Board (ECB) that regulates and promotes the game of cricket in the UAE and is a member of the International Cricket Council.

The rapid-fire spread of the T10 League has encouraged T10 Sports Management – owner of the T10 League to add two more franchise teams and spread the tournament to 29 matches to be played in 12 days — ensuring greater visibility, participation and extended reach of the ten-over format cricket across the world.

The T10 League, in many ways, has captured the imagination of the cricket fraternity and it’s rising popularity has prompted the ICC to recognise the format and sanction the T10 League last July.

Although cricket is not a native Arab or Emirati game, it has become very popular amongst the expatriate population as well as the locals. As a result, the country has seen a flurry of cricket matches – including Test matches, One-Day Internationals, quick-fire T20 and T10 matches being played in Dubai, Abu Dhabi and Sharjah.

This year, the UAE is hosting one of the highest number of cricket matches in the world – both in the domestic leagues and international series as well as the Asia Cup cricket, Pakistan Premier League, Afghan Cricket League, Emirates T20 League as well as the T10 League – making the country a very popular host for cricket matches.

“Just like how T20 cricket revolutionized the sport globally, I think T10 too will modernise the sport and will definitely be an exciting spectacle for the viewers. I had spoken to some of the players who took part in the league last season, and they gave me some really positive feedback about the league. I think this innovation shall also bring about a positive impact on the sport and grow fan bases across the globe,” Australia’s Shane Watson, who was also part of the T10 franchise, said

Most international cricketers now call the UAE a home – due to their frequent appearances in the country. These cricket matches and series are now attracting a large number of fans – from within and outside the UAE — and helping boost sports tourism in the UAE.

“I think T10 could be something you could potentially propose to an Olympic committee,” former England star Eoin Morgan had said during the first edition of the T10 League.

“When you look at the T20 game, it goes on for a little bit longer, so if you are talking about playing in the Olympics, then you’d probably have ten teams or more and that would last five or six weeks. But a ten-over league could be done in about eight days which could be just right.”

“I think the format will grow. Other countries and leagues around the world will buy into it because it’s just like T20 cricket. No-one really trusted T20 when it first came about and it’s the hottest topic now.

“T10 has the potential to do the same. I think it’s just a matter of time before it reaches different countries around the world,” former West Indies allrounder Dwayne Bravo said.