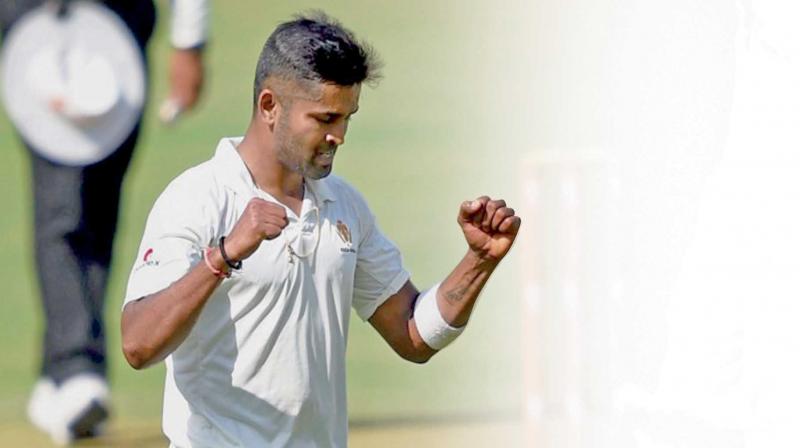 Nagpur: Skipper R. Vinay Kumar led from the front with some devastating bowling and picked up a six-wicket haul including a hat-trick to help Karnataka bundle out Mumbai for 173 in the Ranji Trophy quarter-final that began here on Thursday.

Kumar, who made most of the conditions which aided pace bowling after inserting Mumbai in on winning the toss, returned with impressive figures of 6/34, including the hat-trick completed in two overs, as 41-time champions Mumbai crumbled in only 56 overs on day one of the five-day match at the VCA Stadium in Jamtha.

To continue their domination, Karnataka replied with 115/1 by stumps, as they placed themselves 58 runs adrift of Mumbai with their in-form opener Mayank Agarwal unbeaten on 62 in 83 balls with M Abbas (12 not out) for company.

Karnataka, who topped Group A, are all set to take the first innings lead.

Kumar also became the third bowler to complete a hat-trick against Mumbai, the other two being B. Kalyanasundaram for Tamil Nadu in the 1972-73 Ranji final and Raghuram Bhat for Karnataka in the 1981-82 season.

He became the sixth bowler to take a hat-trick in the knock-out stage of the national championship, the last one to achieve the distinction being S. Sen Sharma for Bengal against Delhi in the pre-quarter final of the 1993-94 season.

Kumar wreaked havoc on the Mumbai batting line-up as he removed young and in-form opener Prithvi Shaw (2), edging to first slip Karun Nair, with the last ball of his first over with the score on 6.

Opener Ankit Dane (59) and Naman Ojha (49) batted well for Madhya Pradesh but could not get the big score their team wanted.

Harpeet Singh frustrated the Delhi bowlers with an unbeaten 47 towards the end of the day and was batting alongside Puneet Datey when stumps were called.