Sharma's knock on Thursday night was studded with half a dozen maximums, including three consecutive in the 10th over. 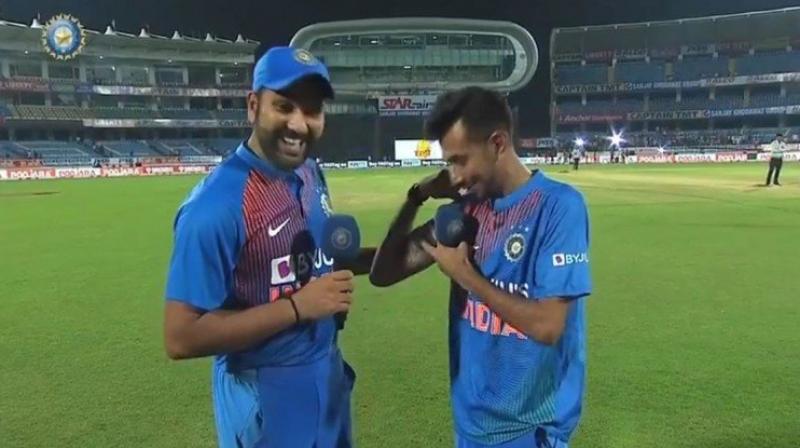 Rajkot: Swashbuckling Indian batsman Rohit Sharma says good timing, and not big muscles, is what is essential to hitting the kind of massive sixes that he strikes.

Hero of India's eight-wicket win over Bangladesh here on Thursday with a 43-ball 85, the stand-in skipper was on 'Chahal TV', an interview-based show conducted by Yuzvendra Chahal for the BCCI's official website.

"You don't need muscles to hit sixes, even you (Chahal) can hit them," the stand-in skipper told Chahal, who broke into a chuckle at the suggestion.

"In any case, sixes are not just about power but also timing, head should be still, position should be good. All this will ensure that you hit sixes," he explained.

Sharma's knock on Thursday night was studded with half a dozen maximums, including three consecutive in the 10th over.

Asked whether he was targetting six consecutive sixes, Sharma said, "I was keen but once I missed the fourth I thought I will take singles. I was trying to hit without moving."

Sharma also stressed on the need for one batsman to hold the innings like he did here.

"It was important for someone to play long because when one batsman plays for long, then he can take the team home. I am happy with myself and more importantly with the team," he said.

"We were under a bit of pressure because we had lost the first match but we did everything that was required. Obviously we can always do better," he added.

The series-deciding third and final match will be played on Sunday in Nagpur, followed by a two-Test assignment, the last of which will be the two teams' first-ever Day/Night clash.