Smith has redeemed himself: Glenn McGrath

Smith scored 144 and 142 against England at the Edgbaston in his comeback Test. 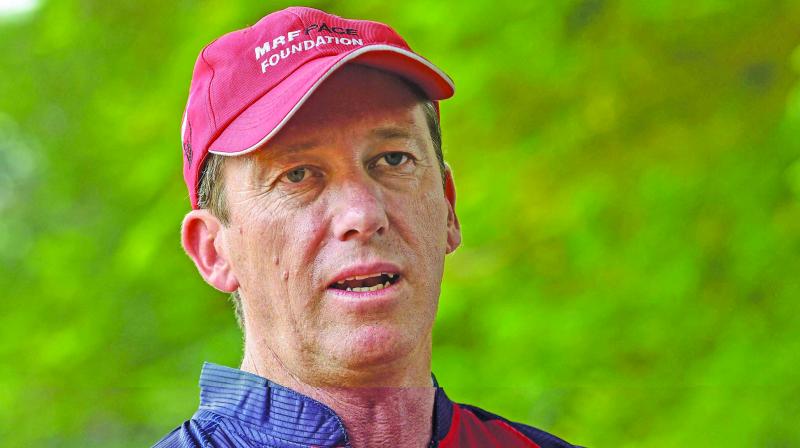 CHENNAI: The opening Ashes Test at Edgbaston witnessed one of the greatest comebacks as Australia rallied from behind to stun England by 251 runs. The main protagonist of Australia’s sensation win was Steve Smith who produced centuries in each innings. The Aussie not only bailed his team out but also redeemed himself after being banned for a year for his involvement in the ball-tampering scandal.

Former Aussie pacer Glenn McGrath said it’s time to put “Sandpaper-gate” behind and give due credit to the batsman for his sensational knocks. “It’s been 16 or 17 months since what happened in South Africa and it’s time to be left in the past. Other players, too, have made mistakes. They served their time and learnt valuable lessons and it’s time to move on,” said McGrath who is here to supervise a camp at MRF Pace Foundation.

Smith scored 144 and 142 against England at the Edgbaston in his comeback Test. “You have to go out there and let the bat do the talking. The crowd was giving Smith a pretty hard time. For him to come out there and perform shows the mental strength he has,” said McGrath.

McGrath believes that it was the hunger to succeed having lost out a year of Test cricket that was evident in his batting. “He just went out there and looked at ease, he looked like he had so much more time than anyone else in the whole match. That shows class. That episode made him a lot hungrier. Those were a couple of special innings, they meant a lot to him and the rest of the team,” he added.

McGrath said Smith and Virat Kohli are like chalk and cheese when it comes to personality, but they are two of the best batsmen in the world at the moment. “Kohli and Smith are totally different; even their batting technique. Smith is an introvert and very relaxed. Kohli, on the other hand, is an extrovert with a bit of emotion and gets fired up,” he added.

Smith is going to be a pretty special end of his career, according to the legendary pacer. “Smith averages 62 with the bat now. In the past, the best batsman used to be in the high 40 and 50s. This piece of stat says a lot. He is not our conventional, technically-correct batsman. Australia had batsmen such as Mark Waugh and Damien Martin who were natural stroke-makers. People paid money to watch them bat,” he said.

“Smith is kind of between Steve and Mark Waugh. He has got his own technique and got a great eye and hard to bowl to. He hits to the unusual area. You bowl a ball outside the off-stump, he will hit it behind square on the leg-side. He is one of the few batsmen who can swiftly change technique to adapt to the condition well. Once he gets over 100 Test matches and maintains that average, he will be really special,” he added.

McGrath said he quite liked the idea of players wearing names and numbers on their white flannels in Test matches.

“I actually don’t mind it. It’s good especially for people who are getting interested in the game. Some of the players stand out (even without numbers), but others not so much. McGrath’s compatriots Brett Lee and Adam Gilchrist had criticised the innovation by calling it “ridiculous” and “rubbish” respectively.

Talking about the World Cup final, McGrath said: “I would have liked to see a clear-cut winner. Maybe they could have played another Super Over or a bowl off where you actually get to the finish and have a clear-cut winner. Having said that both teams knew the rules when they stepped in to play.”