The duo shared their photo which revealed a unique similarity between the two players. 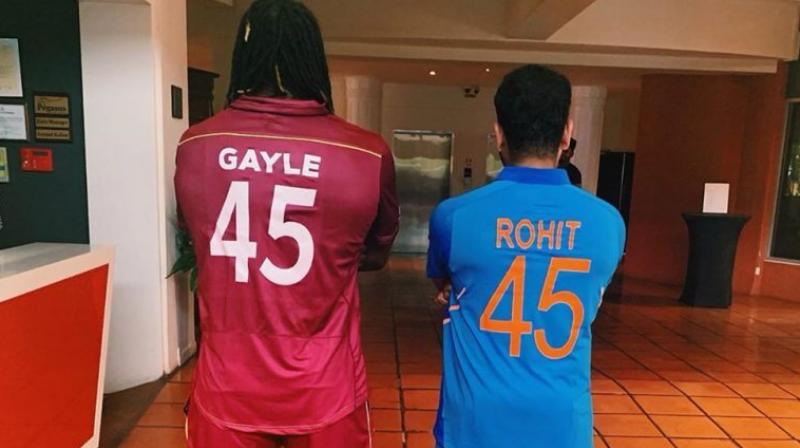 Mumbai: Before the first ODI match between India and West Indies, Indian Vice-captain Rohit Sharma and West Indies cricketer Chris Gayle shared an interesting photo on Instagram. The duo shared their photo which revealed a unique similarity between the two players.

India is set to face the West Indies in a three-match ODI starting from today, August 8 in Guyana. It seems like Rohit wants to share the funny moment with his fans. The photo shows both Rohit Sharma and Chris Gayle donning their national jersey while their backs area facing the camera.

Apart from the jersey number, both the opening batsmen also share other similarities. Both open the batting for their respective teams (Rohit for India, Gayle for West Indies). Rohit and Gayle are popular for their six hitting abilities.

The hitman and the Universe’s boss are the top batsmen who have struck most sixes in T20Is. Both Sharma and Gayle have scored 200s in ODIs (Rohit has 264 as his highest ODI score, while Gayle has 237 as his top score).

After ensuring a 3-0 whitewash against the West Indies, India will be looking to clinch the three-match ODI series 3-0. The first match starts on Thursday at the Providence Stadium.