Shaun Marsh was already been ruled out of the tournament after suffering a fractured wrist in a net session. 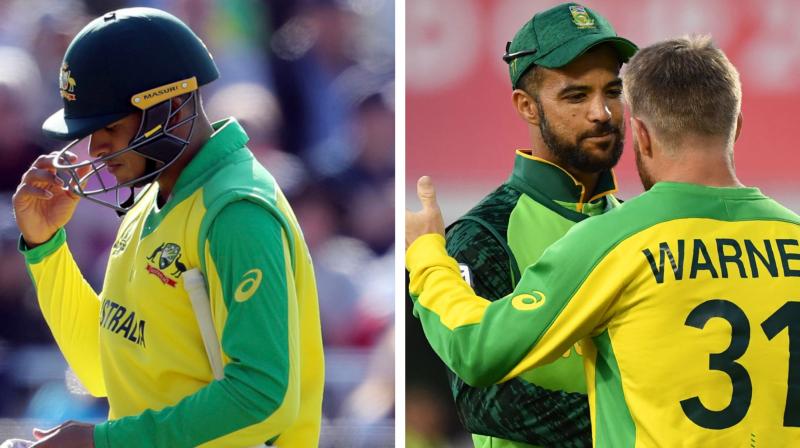 Australia's defeat in their final group stage game to South Africa on Saturday was compounded with injuries to Usman Khawaja (hamstring) and Marcus Stoinis (side) that saw Matthew Wade and Mitchell Marsh pulled out of the Australia A tour to join the World Cup squad as cover. (Photo: AP/AFP)

Manchester: Australia's assistant coach Ricky Ponting has admitted that his injury-ravaged team, beaten by South Africa in the last league game of the World Cup, is facing a tough situation but says the players can find a way to play their best game in the semifinal.

Australia's defeat in their final group stage game to South Africa on Saturday was compounded with injuries to Usman Khawaja (hamstring) and Marcus Stoinis (side) that saw Matthew Wade and Mitchell Marsh pulled out of the Australia A tour to join the World Cup squad as cover.

Shaun Marsh was already been ruled out of the tournament after suffering a fractured wrist in a net session.

The defending champions play pre-tournament favourites England in the second semifinals on Thursday.

"It's not unusual to have disruptions in World Cups. In the last group game before a semi-final is probably a little bit different. If you're totally honest, it's not ideal to have these sort of changes going into a World Cup semi-final, especially now we know we're playing England, the favourites coming into the tournament," Ponting said.

"It's up to us coaches to make it as easy as possible for those guys coming in, talking through scenarios and situations and just trying to keep them as free in the mind as possible," he was quoted as saying by cricket.com.au.

Despite losing to South Africa in their last league match, which resulted in India taking the top spot in the points table, Ponting said Australia have been the best side of the tournament to date.

"We've beaten England already in the tournament. I think it's fair to say we've been the standout team of the tournament to date. A loss now, although it's not ideal going into a semi-final, it's probably not the worst thing either. It could be a bit of a wake-up, a bit of a freshen up and a bit of a reset. It might just make us a better team.

"Australia's best game has to be in the semi-final, it's as simple as that," he said.

Ponting stressed at the beginning of the tournament that peaking at the back-end of a World Cup, rather than in the initial stages, must be Australia's major priority.

"We've been talking about it, we've been building up, looking for that perfect game of cricket. As good as we've been in the tournament, we haven't done that yet and we were a long way off doing it (against South Africa).

"That's what the focus will be. It's up to the players now to find another level to beat England."

"I think back to 2003 with (Shane) Warne ruled out before a ball was bowled, (Jason) Gillespie played one game and was ruled out, we had Michael Bevan going into the tournament with injury and Darren Lehmann suspended going in. We had a bit going on there," said the former captain.

"Fast forward to 2007 and Andrew Symonds didn't play the first half of the tournament."

But, asked if he'd had any quite like the ones the team is facing now, the 44-year-old said: "Probably not at the end of a tournament."