Yuzvendra Chahal, according to Kohli, was a forced change in the last game and it's still not clear whether there's been an injury issue. 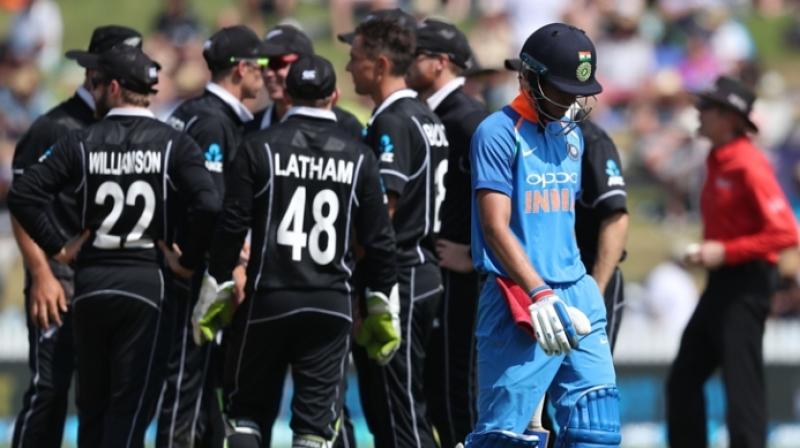 In case India go in with three seamers, including Bhuvneshwar Kumar, then Kedar Jadhav, with his round-arm off-spin apart from cheeky strokes, could once again replace Dinesh Karthik in the middle-order. (Photo: AFP)

Manchester: A formidable Indian top-order, led by tournament top-scorer Rohit Sharma, will be taking fresh guard in its quest for two good days but a plucky New Zealand seam attack will be ready and waiting to knock at the corridor of uncertainty in the World Cup semi-final here Tuesday.

It has been a campaign in which Virat Kohli's men have been successfully able to hide their chinks even without a suitable 'Plan B' but it now boils down to having two days and they don't have an option of letting the script go awry.

The sub-plots promise to be fascinating --- Rohit trying to hook a Lockie Ferguson bouncer, KL Rahul negotiating one from Trent Boult that could tail in, Kohli smashing Matt Henry all around.

Or it could be Kane Williamson's near-perfect technique against spinners or Ross Taylor trying to get a grip of Jasprit Bumrah.

Last but not the least is whether Mahendra Singh Dhoni is able to get a hang of Mitchell Santner's slow left-arm orthodox bowling having watched him closely at the Chennai Super Kings nets.

A near-flawless campaign could come to a naught against a gutsy Black Caps side which has always asked probing questions in ICC tournaments.

To India's comfort, New Zealand's tournament has gone on a downward spiral during their last three games but their initial good work helped them beat Pakistan to a last-four spot.

Not to forget that all-rounder Jimmy Neesham (11 wickets) and Colin de Grandhomme (5 wickets) take the seamers' tally to 58 wickets.

'Law of averages' can be a worry for India simply because the top-order hasn't had a failure as such, even the loss against England saw Rohit and Kohli score runs.

The middle-order hasn't yet faced a '30 for 3 day' in the competition and Boult's first spell under a cloudy Manchester sky could unsettle the best in the business.

Also, save Hardik Pandya, the other middle-order batsmen haven't inspired the highest confidence and that includes Dhoni despite his 293 runs and a 90 plus strike-rate.

He has scored runs on some tricky wickets but he would be certainly hoping for a lot more against the Black Caps. What could go in his favour is the pace at which Henry and Ferguson would bowl. If his horizontal bat shots get going, Dhoni will be a different player to deal with.

New Zealand's 'achilles heel' has been their batting as none from their top-order, save Williamson (481 runs), have been able to stamp their authority.

Bumrah didn't play the last bilateral series in New Zealand and he could prove to be more than a handful for the horribly out of form Martin Guptill (166) and Coin Munro (125).

New Zealand's poor batting is reflected from the fact that save Williamson, the only other top-order player to have crossed an aggregate of 250 runs is Ross Taylor (261).

In terms of batting, they are no match for India where a much criticised Dhoni has also scored near 300 runs.

However, there could be some changes in the line-up as number of right-handers in the New Zealand line-up may prompt India to drop one of the two wrist spinners.

Yuzvendra Chahal, according to Kohli, was a forced change in the last game and it's still not clear whether there's been an injury issue.

Ravindra Jadeja was accurate in his first appearance and he could be in consideration.

In case India go in with three seamers, including Bhuvneshwar Kumar, then Kedar Jadhav, with his round-arm off-spin apart from cheeky strokes, could once again replace Dinesh Karthik in the middle-order.

In the end, on a knock-out day, Kohli wouldn't mind an inside edge to miss stumps or go for a boundary when batting and enjoy the benefits of a horrible mix-up between opposition batsmen while fielding.

That's the slice of luck everyone needs apart from the 99 per cent effort on a big day.

In their trophy-winning campaign of 1983, India had faced England in the last-four stage. England would be up against Australia in the second semifinal on July 11 in Birmingham.