ICC CWC'19: Mayank Agarwal practices in nets ahead of semi-final against NZ

Agarwal, who has played two Tests and is yet to play an ODI, was called in to replace all-rounder Shankar last week. 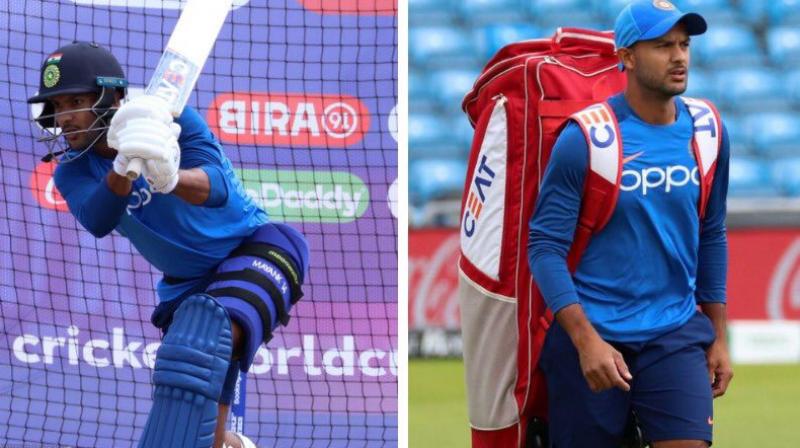 The top-order batsman Agarwal in a tweet shared a picture from India's practice session. He can be seen batting in the nets. (Photo: Mayank Agarwal/Twitter)

New Delhi: Mayank Agarwal, who replaced Vijay Shankar in the India squad for the remainder of the ICC Men's Cricket World Cup, was seen practising in the nets ahead of the semi-final against New Zealand, scheduled for July 9.

The top-order batsman Agarwal in a tweet shared a picture from India's practice session. He can be seen batting in the nets.

"Doing what I love. Loving what I do," Agarwal tweeted.

Doing what I love. Loving what I do. #PracticeSession #CWC19 pic.twitter.com/hx6b0O6BEg

On June 5, KL Rahul welcomed Agarwal in the UK, saying, "Started from the bottom, now we here... Welcome Homie."

Agarwal, who has played two Tests and is yet to play an ODI, was called in to replace all-rounder Shankar last week. Shankar was ruled out of the tournament after sustaining a toe injury.

"Vijay Shankar sustained a non-displaced fracture of the left big toe, which will require a minimum of three weeks to heal. The injury rules him out of the ongoing World Cup. The Indian team management has requested the ICC to consider Mayank Agarwal as his replacement," a BCCI source had told ANI.

Shankar had missed India's clash against England on June 30 and Rishabh Pant, who received a World Cup call after opening batsman Shikhar Dhawan was ruled out, replaced him.

Earlier, Ambati Rayudu made a decision to step away from cricket and retired from all forms and levels of the game.

The cricketing fraternity had sympathised with Rayudu, who was overlooked by the team management, which picked Agarwal as a replacement player for an injured Shankar in India's 15-man World Cup squad.