India atop the points table in the ongoing premier tournament and will face fourth-positioned New Zealand in the semi-final on July 9. 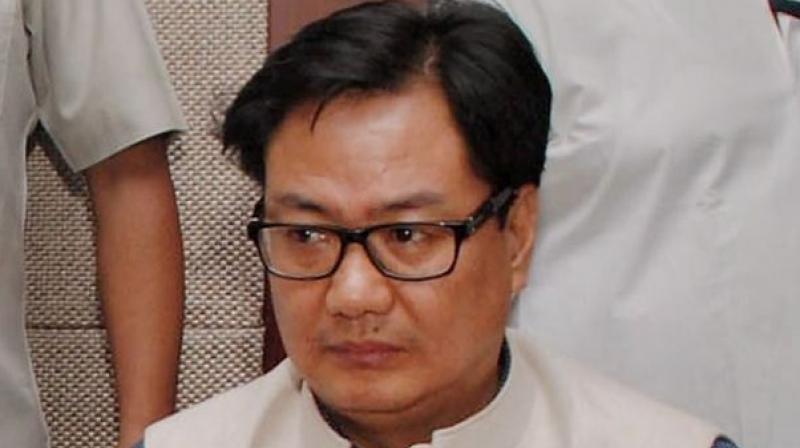 Rijiju also expressed his dissatisfaction with India's performance at the Olympics. (Photo: PTI)

Mumbai: As India have made their way into the World Cup semi-finals, Union Minister Of Youth Affairs & Sports Kiren Rijiju on Sunday said that he is 'extremely optimistic' that India will lift the Cup for the third time.

"I have already sent my official greetings to the coach and Indian team. Since India is already there in the semi-finals, we hope and looking at the performance of our players, we are extremely optimistic and hopeful that India will be able to lift the World Cup once again and will bring the World Cup back home for the third time," Rijiju told reporters.

India atop the points table in the ongoing premier tournament and will face fourth-positioned New Zealand in the semi-final on July 9.

India and Pakistan came face to face in the World Cup and India thrashed its traditional rival by 89 runs on June 16.

Last month, CoA, which governs the BCCI, has sought permission from the government to host Pakistan for One-Day International series as part of the ICC Women's Championship.

When asked whether India women's team will compete against Pakistan women's team, Rijiju said: "When you are taking up bilateral matches or events with another country, then it is a matter between two countries. For that matter, we will have to consult the MEA and the PMO. But when it is a multi-lateral tournament like the World Cup, then there should be no issue. But I cannot comment on bilateral because it is a little sensitive."

Moreover, Rijiju also expressed his dissatisfaction with India's performance at the Olympics.