The June 13 contest at Nottingham, featuring the only two unbeaten teams at that stage, was called off without a ball being bowled. 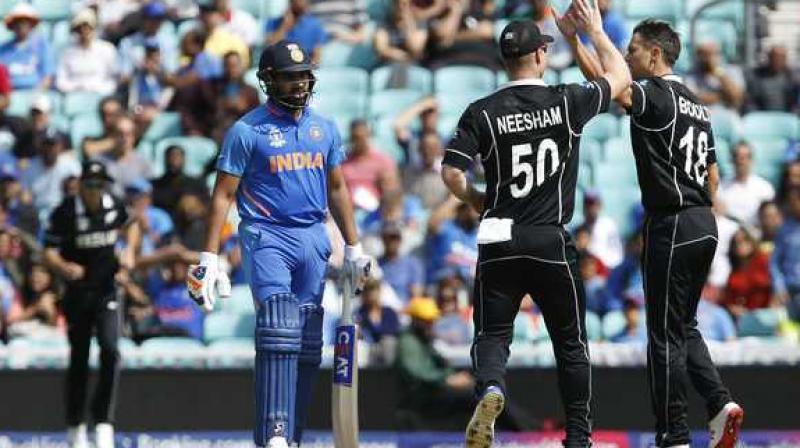 India, in imperious form, registered a 4-1 victory in the one-day series and prevailed 2-1 in the Twenty20 Internationals in New Zealand earlier this year. Rohit Sharma is walking bakc to pavilion after being dismissed by Trent Boult during India versus New Zealand World Cup Warm up match. (Photo:AFP)

Manchester: India may have been denied first-hand experience of the threat posed by New Zealand when their World Cup group game was washed out but Virat Kohli’s men say there will be no mystery for them when the teams face off in their semi-final on Tuesday at Old Trafford.

The June 13 contest at Nottingham, featuring the only two unbeaten teams of the tournament at that stage, was called off without a ball being bowled but India assistant coach Sanjay Bangar said his players would not be concerned.

“It’s not too long ago that we played a full series in New Zealand,” Bangar pointed out.

India, in imperious form, registered a 4-1 victory in the one-day series and prevailed 2-1 in the Twenty20 Internationals in New Zealand earlier this year.

New Zealand did see off India by six wickets in a World Cup warm-up match at The Oval but Bangar said India, who saw off Sri Lanka by seven wickets on Saturday to top the group stage, would continue to focus on themselves rather than their opponents.

“We are just keen to get on and play the semi-final as soon as possible. We need to keep doing the things we are doing at the moment.

“We have always maintained that we are looking at our internal parameters. If we are hitting our internal indicators, then we will be playing at our best and that is what we aspire to do.”

Tuesday’s contest, intriguingly, will be a repeat of the semi-finals of the 2008 ICC Under-19 World Cup in which a Virat Kohli-led India defeated a Kane Williamson-captained New Zealand in Kuala Lumpur.

India’s success at this World Cup has been built on the heavy scoring of a Rohit Sharma-led batting top order, but Bangar rejected suggestions the team’s middle order was undercooked.

“I don’t think so,” the former test all-rounder said, highlighting the cameos played by Rishabh Pant, Hardik Pandya and Mahendra Singh Dhoni during the group stage.

“Of course the middle order hasn’t got to bat for a longer period of time, except for the Afghanistan game. But Hardik has done a role, Mahi has done a role and Rishabh has had a few good knocks.

“As long as we are getting the job done it really augurs well for the team.”

The second semi-final takes place on Thursday between Australia and hosts England at Edgbaston.