ICC CWC’19: Chahal-Yadav combination to be dropped against New Zealand?

India went on to face Sri Lanka with two spinners, but rested Chahal to bring in all-rounder Jadeja. 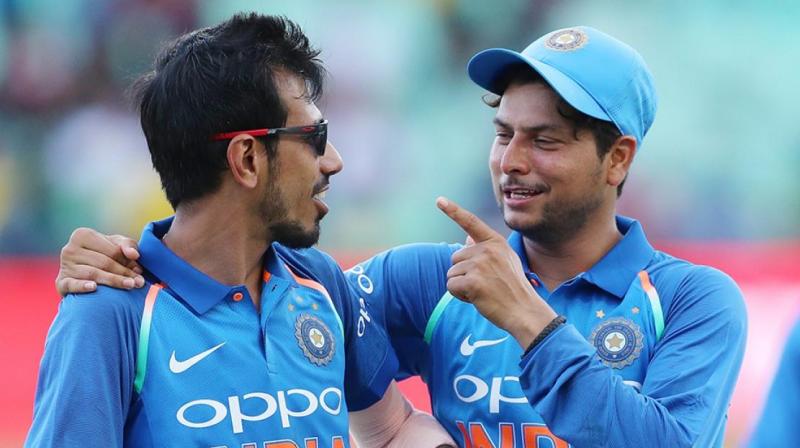 Chahal and Yadav played together in the England game and took one wicket at the expense of 160 runs (Photo: BCCI / File)

Mumbai:  After the loss against England, India did not play Yuzvendra Chahal and Kuldeep Yadav together for the first time in the tournament.

When India beat Bangladesh to confirm their semi-final spot, they still didn’t feature the spinning-duo together in their last league match against Sri Lanka, rather opting to rest Chahal for the game.

The Men in Blue instead went with Ravindra Jadeja. The player, who hadn’t played an ODI for a year between August 2017 and August 2018, shone with his spin bowling, also offering his batting performance to the team. This happening one game before the semi-final makes us wonder if the go-to spinner combination that India has had for a long time has changed.

Chahal and Yadav played together in the England game and took one wicket at the expense of 160 runs, combined. Economy figures went up drastically. So much, that India decided to face Bangladesh in the next game with just one spinner, Chahal.

India went on to face Sri Lanka with two spinners again, but rested Chahal to bring in Jadeja, who brings batting, fielding and hence, balance to the equation.

India has already realized the importance of having three pace bowlers. The pace has been taking care of the majority of batsmen that oppose India. Now fitting in two spinners out of three ahead of a semi-final would be a much easier decision if one of them was to also provide quality assistance to batting side of the team.