Bangladesh dropped down to 8th place at the end of the league phase of the World Cup after South Africa beat Australia in the last match. 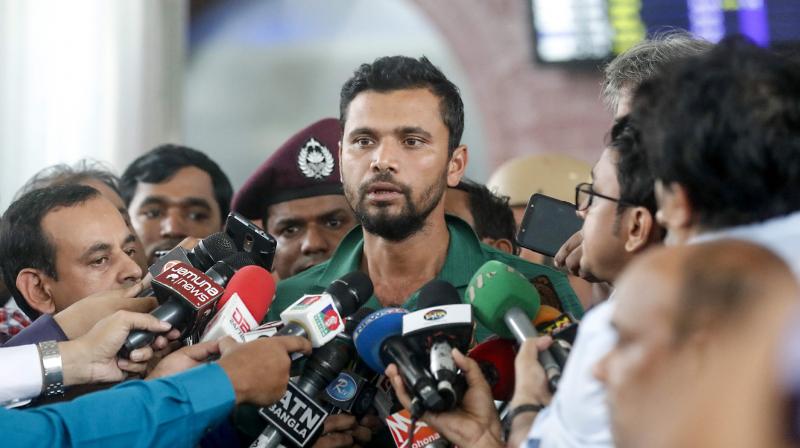 Dhaka: Bangladesh captain Mashrafe Mortaza Sunday said he regretted his team let down its supporters and that he took responsibility for failing to reach the World Cup final four.

"We are definitely disappointed. If some results had gone our way maybe we could have reached the semi-final," Mashrafe told reporters after the team's return to Dhaka.

"Overall, the way we played was very positive... but we couldn't fulfill our expectations," he said.

"If we had won the last match, we could have finished fifth. But I'm sure all spectators and players wanted the team to finish in the top four," he said.

Bangladesh dropped down to eighth place at the end of the league phase of the World Cup after South Africa defeated Australia in the last match before the semi-finals, at Old Trafford.

Bangladesh defeated South Africa, West Indies and Afghanistan and narrowly lost to some top teams to stay in contention for a semi-final place until their penultimate game.

They ended the competition with successive defeats against neighbours India and Pakistan.

Mashrafe said a lack of consistency by some of the players, coupled with poor luck, hurt the team's prospects in the tournament.

"Until the India match, we officially had a chance for the semi-finals. But other than Shakib (Al Hasan) and Mushfiq (Mushfiqur Rahim)" there was a lack of consistency, he said, adding allrounder Mohammed Saifuddin played "outstanding cricket".

"One whole week was interrupted by rain, which hampered us and helped some teams."

Shakib finished the World Cup with 606 runs and 11 wickets while paceman Mustafizur Rahman was among other top Bangladeshi performers, claiming 20 scalps.

Mashrafe himself struggled with form in the tournament, picking up just one wicket in eight matches.

The 35-year-old medium pacer has refused to speak clearly about his future plans.

"As a captain, if I fail to lead the team to expected results, there will always be criticism. I have to take responsibility for the entire team. That's normal," he said.

"I take full responsibility as I should. But I would like to say that players face criticisms all around the world, especially after a tournament or series.

"And it happening after the World Cup is very normal," he added.

Subjected security clearance, Bangladesh are likely to visit Sri Lanka for a three-match one-day international series at the end of this month for their next assignment.