Pakistan and Sri Lanka went into the game with a win and a loss, and now each gets a point for the washout. 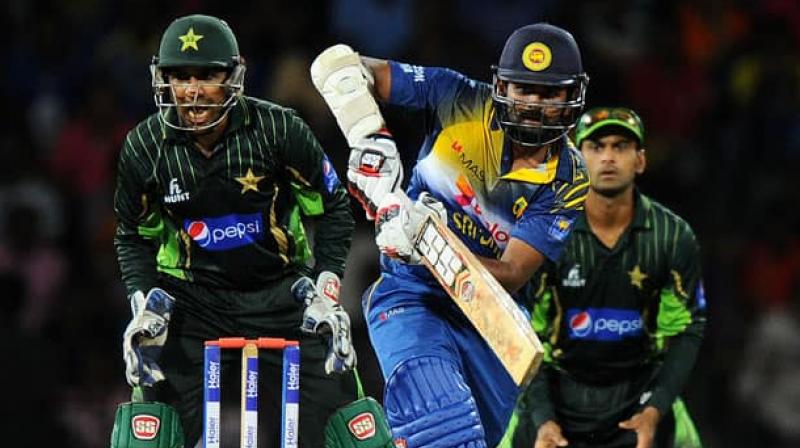 Pakistan had ended a run of 11 straight losses in one-day internationals by beating top-ranked England by 14 runs (Photo: AFP)

Bristol: The Cricket World Cup had its first washout on Friday, with rain preventing any ball being bowled in the group match between Pakistan and Sri Lanka.

The 11th game of the tournament always looked under threat on Day 9 after persistent rain in the morning at Bristol's County Ground.

The rain started to ease around noon and conditions had improved at the time of a pitch inspection, with occasional sunshine, but umpires decided the ground was too wet. The decision was announced shortly after 3:45 p.m. local time (1445 GMT).

It was only the second fixture across five men's Cricket World Cup tournaments in England, dating back to 1975, that not a single ball was bowled in a game.

Hundreds of Pakistan and Sri Lanka fans, draped in their country's colours, had hoped at least for a reduced, 20-over match but took the decision well. Sri Lanka supporters have already seen one rain-interrupted game, where the 1996 champions beat Afghanistan in Cardiff.

Pakistan and Sri Lanka went into the game with a win and a loss, and now each gets a point for the washout.

Sri Lanka will value that point more than its opponent. Pakistan had won all seven of their previous CWC completed matches with Sri Lanka, including three in England and Wales.

Pakistan had ended a run of 11 straight losses in one-day internationals by beating top-ranked England by 14 runs in a thriller at Trent Bridge on Monday. That impressive performance came after its second-lowest World Cup total of 105 in a shambolic opening loss to West Indies.

"As a team, we really wanted to play this match especially after gaining momentum with the win against England," Pakistan captain Sarfaraz Ahmed said. "It is unfortunate that we were not able to play.

"We have great team spirit and our confidence is on a high after beating England. We would want to carry the momentum into the remaining games. We won't relax in our remaining six matches."