Liverpool is the first English side to reach back-to-back finals in the Champions League since Manchester United in 2008 and 2009. 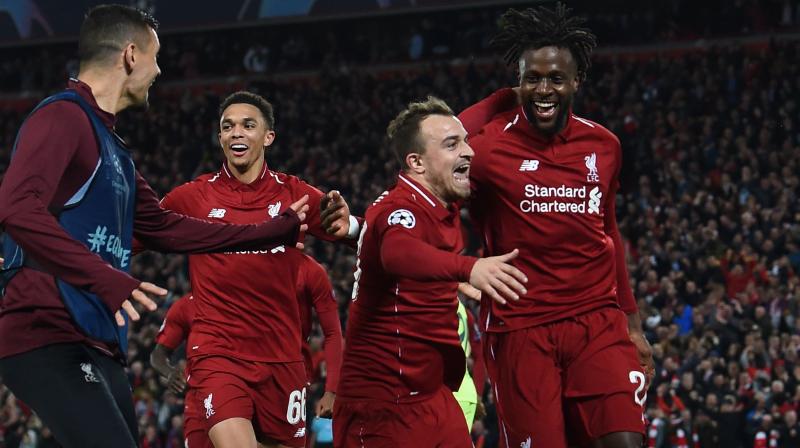 Liverpool started playing with an aggressive mindset right from the beginning of the game. Their efforts paid rich dividends as Divock Origi netted the first goal for the Reds in the seventh minute. (Photo: AFP)

Liverpool: Liverpool on Tuesday staged a remarkable comeback to beat Barcelona 4-0 at Anfield here to reach the final of the UEFA Champions League.
Trailing 3-0 from the first leg, Liverpool bounced back in their semi-final clash to win 4-3 in terms of aggregate to storm into their second consecutive final of Champions League.

Liverpool started playing with an aggressive mindset right from the beginning of the game. Their efforts paid rich dividends as Divock Origi netted the first goal for the Reds in the seventh minute.

Stunned by the early onslaught, Barcelona then changed gears and played aggressive football to keep Liverpool in check. Their defensive tactics ensured that the match went into half time with 1-0 scoreline. With this, Barca still held the upper hand.

Liverpool's unlikely and remarkable comeback began in the second half when Georginio Wijnaldum scored the Red's second goal via a low cross by Trent Alexander-Arnold in the 54th minute.

Two minutes later, Liverpool scored their third goal when Wijnaldum headed the ball beautifully into the net via a cross by Xherdan Shaqiri. Barcelona skipper Lionel Messi tried to create chances and reduce the goal margin. But Liverpool, buoyed by scoring three goals, just did not even give the slightest chance to the Argentine to make a difference for his team.

With just 10 minutes to go, Alexander-Arnold outwitted Barcelona's defence for the fourth time via a corner kick to give Origi another chance to net a goal for his team.

By this time, the crowd went berserk and believed that the Reds had indeed avenged their first leg defeat at Camp Nou.

As the referee blew his whistle for one final time, Liverpool players went berserk and celebrated with their coach Jurgen Klopp and other staff members.
It was indeed a remarkable comeback by the Reds in the Champions League, who looked down and out, with the absence of their star strikers Mo Salah and Roberto Firmino.

Liverpool will be now aiming for their sixth triumph and will face either Ajax or Tottenham in the final at Madrid on June 1. Liverpool were the runners-up in last year's UEFA Champions League, with Real Madrid winning a record 13th title. The Reds last won the tournament in 2005 and would be looking to break the 14-year victory drought.

Liverpool is the first English side to reach back-to-back finals in the Champions League since Manchester United in 2008 and 2009. Meanwhile, Ajax and Tottenham will face off at Johan Cruyff Arena in Amsterdam on Wednesday.
Ajax is having a 1-0 aggregate against Tottenham and a draw would be sufficient for them to qualify for the final and join Liverpool.