Skipper Rohit shuffled his bowlers like a pack of cards and all the changes he made worked wonders. 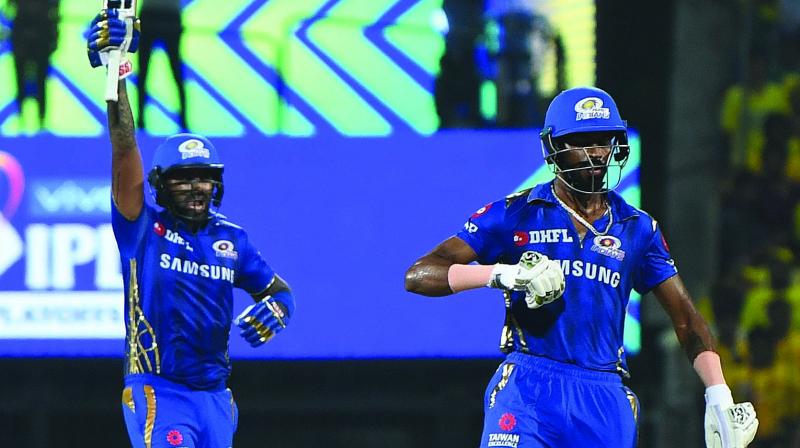 Chennai: There is something about Mumbai Indians and their uncanny ability to deliver at the hostile M. A. Chidambaram Stadium here. The slow Chepauk surface has, time and again, proved to be a graveyard for the travelling teams, but Rohit Sharma & Co. seem to thrive on it. Mumbai pulled off yet another coup at Chennai Super Kings’ citadel on Tuesday to storm into the IPL-12 final. The six-wicket win was Mumbai’s fifth successive at Chennai. With a lot to ponder, Super Kings will now travel to Vizag to play Qualifier 2 for another shot at the title clash.

After losing both their openers — Rohit Sharma and Quinton de Kock — within powerplay, Mumbai made a swift recovery through Suryakumar Yadav (71 not out off 54 balls) and Ishan Kishan (28). The duo put on a vital 80 runs for the third wicket. Imran Tahir took two wickets off as many balls to leave Mumbai 101 for four, but Hardik Pandya and Suryakumar ensured it was clinical from then on. CSK fielders were guilty of letting Suryakumar off the hook twice, on 11 and 53.

Earlier, M. S. Dhoni (37 off 29) and Ambati Rayudu (42 off 37) forged an unbroken fifth-wicket stand of 66 off 47 balls to lift Chennai to 131 for four. On a slow track where spinners turned it square, CSK who chose to bat were heading for a disaster at 65 for four, but Dhoni’s calming influence in the company of Rayudu steered them to a decent total. The duo scored 63 runs off last seven overs.

Coming into the match, Super Kings’ biggest worry was their misfiring top-order and their misery only compounded against Mumbai’s disciplined bowling attack. Rohit Sharma made his intentions clear when he picked off-spinner Jayant Yadav in place of overseas pacer Mitchell McCleneghan. Jayant had played just one match this season. Leg-spinner Rahul Chahar struck in his very first ball to remove Faf du Plessis, while Jayant made it 12 for two by packing off Suresh Raina who paid the price for playing across. Shane Watson’s pull shot off Krunal Pandya that led to the struggling Aussie opener’s undoing, too, was unwarranted and it exposed CSK middle-order earlier than expected. CSK were reduced to 32 for three in powerplay.

Skipper Rohit shuffled his bowlers like a pack of cards and all the changes he made worked wonders. The move to bring Jayant against in-form Raina was a masterstroke. M. Vijay who scored at run-a-ball looked fluent before being outfoxed by Chahar. An advancing Vijay missed a sharp turn as Quinton de Kock completed a regulation stumping. Dhoni who is smart in picking his prey targetted Jayant and Lasith Malinga. The 14th (Jayanth) and 19th (Malinga) overs were the most productive with 15 runs each coming off them. Against the off-spinner, Dhoni stepped down the wicket to smack one over the sightscreen, while Malinga who erred in length was despatched over midwicket and long-on boundaries.

Jasprit Bumrah had Dhoni caught at point in the first ball of the final over, but as the CSK captain made his way back replays showed the bowler had overstepped. But Bumrah bowled brilliantly by not conceding a single boundary at the death.