Krunal Pandya and Bhuvneshwar Kumar dismantled the New Zealand top order, reducing the home side to 50-4 after 7.5 overs. 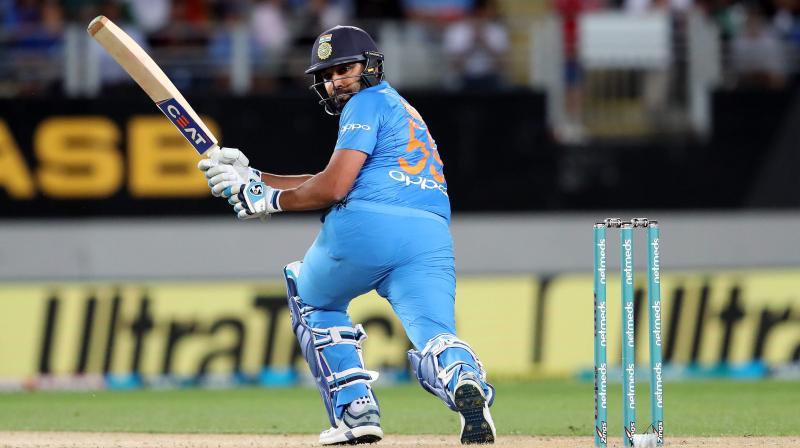 Captain Rohit Sharma dashed a half-century from 28 balls and Rishabh Pant made an unbeaten 40 as India beat New Zealand by seven wickets in the second Twenty20 to level the three-match series at 1-1 on Friday. (Photo: AFP)

Auckland: Captain Rohit Sharma dashed a half-century from 28 balls and Rishabh Pant made an unbeaten 40 as India beat New Zealand by seven wickets in the second Twenty20 to level the three-match series at 1-1 on Friday.

New Zealand won the first match by 80 runs on Wednesday. The final match is on Sunday at Hamilton.

Left-arm spinner Krunal Pandya bowled an outstanding four-over spell, taking 3-28 as India contained New Zealand to 158-8 as it batted first after winning the toss. He was man of the match.

"I was very pleased with the way we bowled to start with and then it was very clinical with the bat as well," Sharma said.

"Something like that we were expecting. We've got quality in our side. It's just that we didn't execute our plans in the first game and we learned from our mistakes. We executed those plans in this game and we got the reward for it."

New Zealand fell well short of the total it needed to have any chance of beating India on Eden Park, where short boundaries make defending any score extremely difficult.

Krunal Pandya and Bhuvneshwar Kumar dismantled the New Zealand top order, reducing the home side to 50-4 after 7.5 overs.

New Zealand needed early wickets but Sharma and Dhawan denied them, knocking off almost half of India's target inside the first 10 overs.

Sharma reached his 16th T20 half-century from 28 balls with three fours and four sixes. He was out immediately afterwards, caught in the deep by Tim Southee from the bowling of Ish Sodhi.

India stayed ahead of the run-rate, and wicketkeeper Pant saw India home in a superb partnership with his mentor, Dhoni.

Dhoni came to the crease to an enormous ovation from the crowd of 30,000, almost two thirds of whom were India fans and most of whom had come to watch Dhoni in his last tour to New Zealand.

The pair came together when India was 118-3 in the 14th over and saw India home in the 19th over when Pant struck a four down the ground off Scott Kuggeleijn.