Chase scored 94 runs with the bat while he picked up two wickets with the ball in his hand. 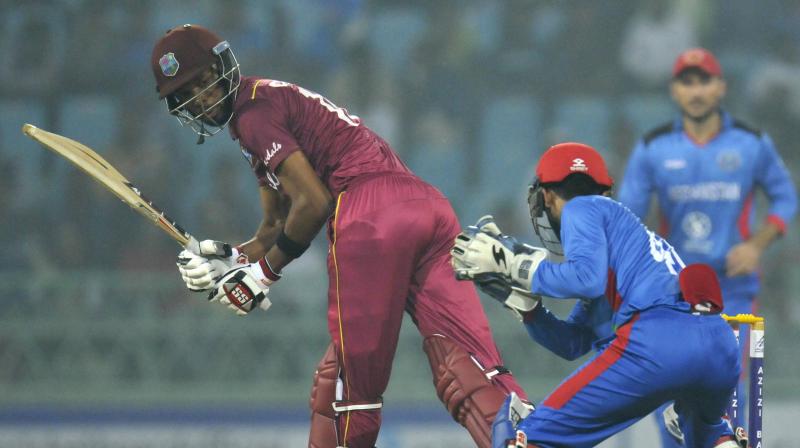 Roston Chase displayed an all-round performance to help West Indies defeat Afghanistan by seven wickets on Wednesday in the first ODI of the three-match series here at the Ekana Cricket Stadium. (Photo:PTI)

Lucknow: Roston Chase displayed an all-round performance to help West Indies defeat Afghanistan by seven wickets on Wednesday in the first ODI of the three-match series here at the Ekana Cricket Stadium.

Chase scored 94 runs with the bat while he picked up two wickets with the ball in his hand.

Chasing 195, West Indies lost its opening two wickets with 25 runs on the board. Evin Lewis (7) was dismissed by Mujeeb Ur Rahman while Shimron Hetmyer (3) was sent back to the pavilion by Naveen-ul-Haq.

Shai Hope and Roston Chase then got together at the crease and retrieved the innings for the team from the Caribbean. The duo put on 163 runs for the fourth wicket.

Afghanistan bowlers tried hard to pick up wickets, but both the batsmen kept them at bay. As the West Indies was just seven runs away from the target, Mujeeb clean bowled Chase (94) in the 44th over.

However, Hope and Nicholas Pooran ensured West Indies' victory by seven wickets and with 21 balls to spare.

Hope and Pooran remained unbeaten on 77 and 8 respectively.

Earlier, a spirited bowling performance enabled West Indies to bowl out Afghanistan for a below-par score of 194 runs after opting to bowl first.

Afghanistan got off to bad start as Hazatullah Zazai (9) and Javed Ahmadi (5) were dismissed with just 15 runs on the board.

Rahmat Shah and Ikram Alikhil then retrieved the innings for Afghanistan as the duo put on 111 runs for the fourth wicket. As soon as the side started to gain an upper hand, a run-out by Lewis and Hope sent Alikhil (58) back to the pavilion in the 27th over, reducing Afghanistan to 126/3.

Soon after, Shah (61) was also dismissed in the 33rd over by Roston Chase leaving Afghanistan in a spot of bother. After Shah's dismissal, no batsmen were able to stay at the crease for a long time and West Indies managed to scalp wickets at regular intervals.

Asghar Afghan played a 35-run knock off 52 balls, but he was the penultimate wicket to be taken by the West Indies. In the end, the visitors managed to bowl out Afghanistan for just 194.

Afghanistan and West Indies will next lock horns in the second ODI on Saturday, November 9.