Shivam making himself at home

Considered to be a white ball specialist, the big hitting all rounder has adjusted well to the longer format. 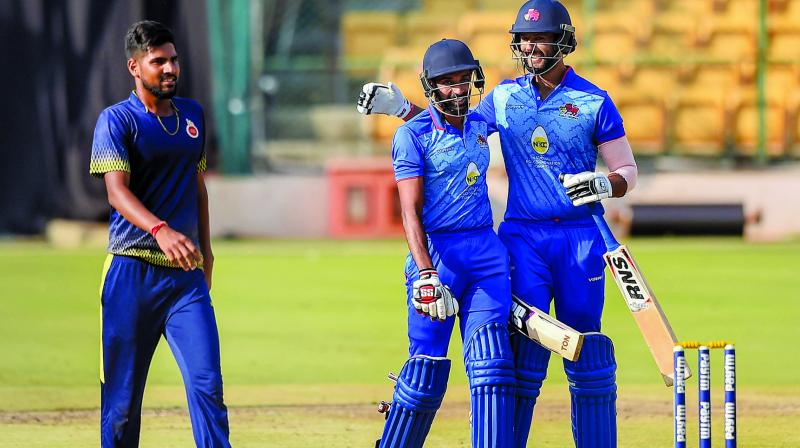 It has been a dream start to Shivam Dube’s Ranji Trophy career so far. The hardworking allrounder considered white ball specialist due to his big hitting ability and variations in bowling has been at home in the longer format.

He has been the go-to man for teams in local tournaments like DY Patil Twenty20 Cup or T20 Mumbai League. He has done well for Mumbai also in List A and Twenty20 cricket.

The 25-year-old made his First Class debut last season in the crucial quarter-final match in Nagpur. Mumbai couldn’t progress but Dube starred with the ball by taking a maiden fifer and scored 71 in second innings to announce his arrival.

“I practice hard and try to hit good areas and bowl right length. With red ball I just try to bowl more overs, be patient and try to not give runs,” he said.

He played his second Ranji match 10 months after against Railways but didn’t show any signs of lay off. It followed after a tournament winning effort from Mumbai in the Vijay Hazare Trophy where Dube was a vital cog with both bat and ball.

In whites he rose again with his maiden ton (114) in first innings and followed it up with unbeaten 69 in second innings also taking a wicket in between and keeping things tight.

His ton was crucial, as Mumbai had just recovered with hundred plus partnership between seniors Suryakumar Yadav and Siddhesh Lad. They were losing their way again with Surya and Aditya Tare getting out in quick time. But Dube came and shunned his aggressive batting style to engage in 79-run partnership with Lad who was unfortunately out on 99. Dube continued to prosper in company of skipper Dhawal Kulkarni to ensure Mumbai score big in first innings and prevail on the basis of first innings lead.

The patient knock from left-handed batsman Dube known for otherwise hitting big sixes showed he is capable to adjust to any situation.

“I am an aggressive batsman but I try to adjust according to situation in four-day match. However I ensure I don’t miss out on punishing balls who are meant to be hit,” he said.

Dube along with Tushar Deshpande have given Mumbai seam attack extra zing this season that was missing in last couple of seasons. “I worked with seniors like Dhawal Kulkarni. We are clicking in all areas and bowlers including me are performing well,” he said.

Shivam’s consistent show this season in Vijay Hazare Trophy and now Ranji has meant another allrounder Akash Parkar has stayed on the bench so far. Dube’s place as an all rounder remained unaffected during Vijay Hazare Trophy even when five international players – Rohit Sharma, Ajinkya Rahane, Prithvi Shaw, Shreyas Iyer and Shardul Thakur played for Mumbai because four of them are batsmen and Thakur is a specialist bowler.

“I am not worried by the competition. I always work on my game and try to perform in every match. International players are very supportive and handle the team well. They give confidence and are ready to share whatever they learn for international experience. It is always good to learn good things from them,” he revealed.

After gruelling Vija Hazare Trophy where Mumbai played eleven matches before lifting Trophy followed by Ranji match against Railways that concluded on Sunday, Mumbai have enough breathing space before next match against Karnataka in Belgaum from November 20. The match will be followed by home game against Gujarat from November 28 at Wankhede stadium.

“I just had a day’s rest and started my preparations again today. There is no point in taking rest as we have Ranji Trophy matches coming up. I am looking forward to play first time at home (in whites),” he said.