Sushma Swaraj passed away on Tuesday night after suffering a massive heart attack. 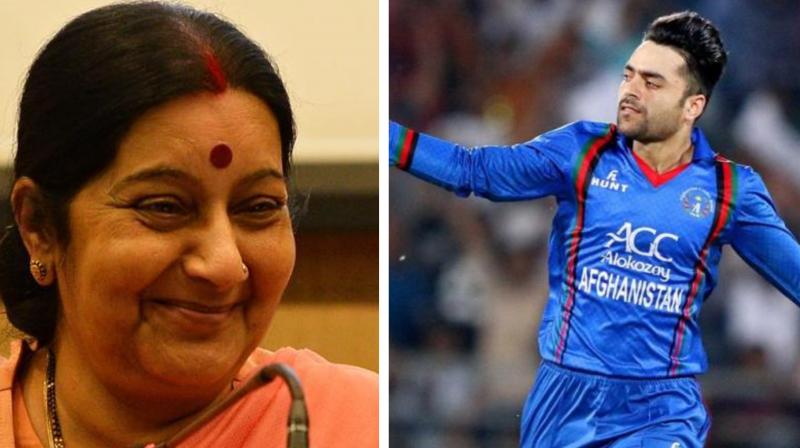 The 19-year-old played a match-winning knock of 34 runs and also scalped three wickets while conceding only 19 runs from his spell. (Photo: AFP)

Mumbai: Former external affairs minister Sushma Swaraj passed away on Tuesday night after suffering a massive heart attack. Her team as minister was the period when Swaraj was most accessible, offering help and stating views on various issues through her Twitter.

On one occasion in 2018, Swaraj's tweet on Afghanistan all-rounder Rashid Khan had gone viral.

In the second qualifier of IPL 2018 between Sunrisers Hyderabad and Kolkata Knight Riders, it was Khan's all-round performance which steered Sunrisers to the final of the tournament. The 19-year-old played a match-winning knock of 34 runs and also scalped three wickets while conceding only 19 runs from his spell.

Khan's performance helped him emerge as one of the biggest ambassadors of Afghanistan. His name was the top Twitter trend across India on the day after the match, with over 30,000 tweets on his performance. Some Indian fans also demanded him to be granted Indian citizenship.

Acknowledging to this demand from fans all over the nation, Swaraj had responded with a witty tweet saying that the matter of citizenship rested with the Ministry of Home Affairs.

“@rashidkhan_19 – I have seen all the tweets. Citizenship matters are dealt with by Ministry of Home Affairs”, she had tweeted.

Afghanistan President Ashraf Ghani had also responded regarding this issue, stating that they weren't going to let Rashid Khan go.

Afghans take absolute pride in our hero, Rashid Khan. I am also thankful to our Indian friends for giving our players a platform to show their skills. Rashid reminds us whats best about Afg. He remains an asset to the cricketing world. No we are not giving him away. @narendramodi

Swaraj had also lauded Afghanistan when they achieved Test status in 2017. “The fact that Afghanistan attained the status of a Test-playing cricketing nation is a testament to the indomitable spirit of the people of Afghanistan to not let the forces of death and destruction prevail,” Swaraj was quoted as saying by PTI.