Rohit’s aggregate of 647 is 26 fewer that compatriot Sachin Tendulkar’s record of most runs in a single World Cup. 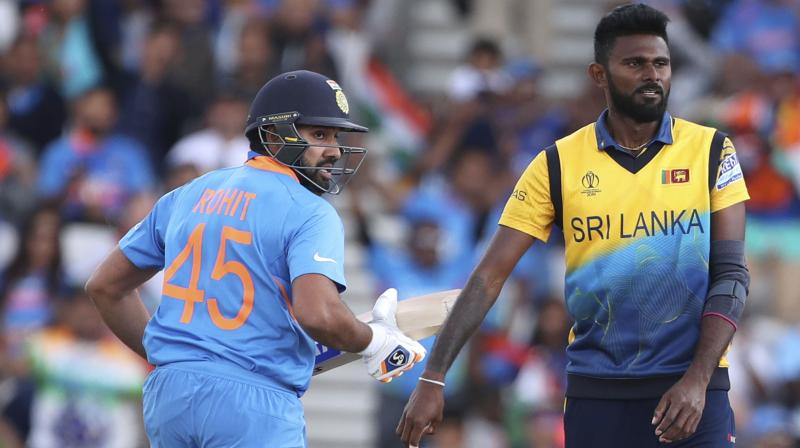 Rohit Sharma became the first player to smash five centuries in a World Cup after his 103 against Sri Lanka at Headingley to consolidate his position as this tournament’s leading scorer. (Photo: AP)

Leeds: India’s run-machine Rohit Sharma shared the secret of his red-hot form in the Cricket World Cup on Saturday, saying he approaches every match as if it was his first.

Sharma became the first player to smash five centuries in a World Cup after his 103 against Sri Lanka at Headingley to consolidate his position as this tournament’s leading scorer.

Skipper Virat Kohli rates him as the best one-day batsman while opening partner KL Rahul feels he is “from another planet” but Rohit attributes his form to his ability to enter every game as if it was his first.

“Every day is a new day,” Rohit said after collecting the man-of-the-match award.

“I start fresh, I try to think I’ve not played any ODIs, not got any hundreds in the tournament. The challenge as a sportsman is to keep your head straight.”

It was easier said than done, he later told reporters, especially with fans and followers constantly reminding him of the milestones.

“Fortunately we have a bunch of guys around us who do not discuss these kind of things too much, about personal milestones. And my family is here to distract me from that.”

The best way to reach milestones was not to bother about them and try to live in the present, said the opener.

“I don’t want to think about how many ODIs I’ve played, or how many runs I’ve scored or how many hundreds I’ve got.

“I just want to stay in the present, which is today, and take it from there.”

Rohit’s aggregate of 647 is 26 fewer that compatriot Sachin Tendulkar’s record of most runs in a single World Cup.

The India vice-captain is the only batsman with three double hundreds in ODIs, including one 264 which remains the highest individual score in this format.

Asked if he would put his five hundreds in this World Cup above those double centuries, Rohit said nothing would matter if they failed to win the cup.

“If we win the World Cup, then probably I would. If not, then I can’t, because eventually winning the Cup is important,” he said.

“For us, as cricketers, it’s important to get the job done, because we all have been looking for this World Cup... the job for us is to go and win the finals.

“But as long as that is not accomplished, no matter how many runs you score in the tournament or how many hundreds you get, you won’t feel satisfied.”

Rohit has in the past talked about his disappointment at not being part of India’s triumphant 2011 squad but the elegant right-hander said he had moved on in life.

“I’m very fortunate that I’m in this position right now. So, yeah, I’m not thinking about what has happened in the past. I just want to stay in the present because we are here for a mission and that mission is not yet complete.”