Australia overwhelmed England in their group stage meeting at Lord's but, significantly, the hosts were without Jason Roy that day. 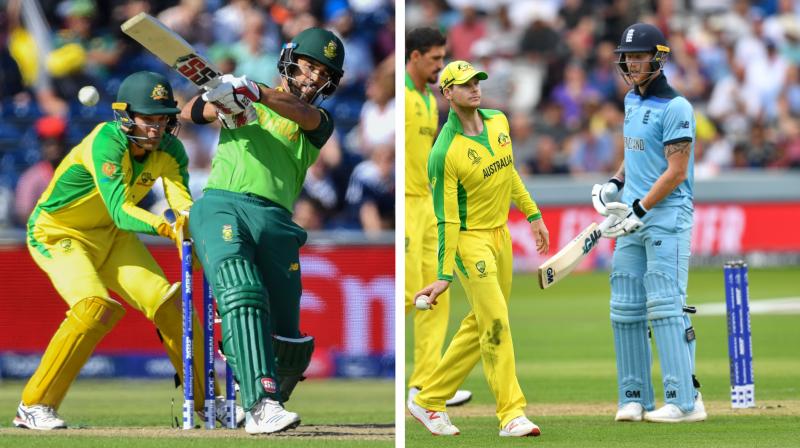 Saturday's narrow 10-run loss means Australia will head to Birmingham to face an England side who have beaten fellow semi-finalists India and New Zealand in their last two games. (Photo: AFP)

Manchester: Australia captain Aaron Finch insisted he was "excited" by he prospect of a World Cup semi-final against England even though his reigning champions will go into Thursday's blockbuster match on the back of a 10-run loss to South Africa.

Had Australia defeated the Proteas in Manchester on Saturday they would have returned to Old Trafford on Tuesday for a last-four clash with New Zealand, who have lost their last three group games -- including an 86-run defeat by Finch's men.

But Saturday's narrow 10-run loss means Australia will head to Birmingham to face an England side who have beaten fellow semi-finalists India and New Zealand in their last two games.

Australia overwhelmed England in their group stage meeting at Lord's but, significantly, the hosts were without Jason Roy that day, with the opener now fit again and firing on all cylinders.

"You have to beat everyone, regardless of who it is or where it is," Finch told reporters.

"Playing well against England a couple of weeks ago obviously will give us some confidence going into that game.

"England have been in really good form recently so we are going to have to be at our absolute best to win that.

"But it's going to be exciting. Any time Australia plays England, it's exciting. But any time you are at Birmingham as well. It's a fun crowd to play in front of.

"It's going to be a great atmosphere and spectacle."

Chasing a target of 326 on Saturday, Australia almost got home thanks to a third century of the tournament from opener David Warner (122) and wicketkeeper Alex Carey's career-best 85, only to be bowled out for 315 off the penultimate ball.

Defeat was compounded by the sight of batsman Usman Khawaja retiring hurt on six with a hamstring injury, while all-rounder Marcus Stoinis continued to struggle with a side strain.

Khawaja bravely came back on to resume his innings in an unsuccessful bid to get Australia over the line.

The left-hander's World Cup may be over, although Finch insisted he had not done himself any more damage by coming back in.

"Usman is not looking great in all honesty," admitted Finch.

"He has done a couple of hammies (hamstrings) before and today feels a bit similar to that.

"He didn't aggravate it anymore when he got out there (again). He wanted to go out, especially when we got as close as what we did. He has well and truly put the team first there.

"Marcus is just a bit sore in his side. We will have to wait for scans tomorrow (Sunday)."

Reflecting on the reasons behind Saturday's loss, the skipper, out for three when he fell to veteran leg-spinner Imran Tahir, said: "I think we were just slightly off with our execution in the field and with the bat as well.

"There were a couple of lazy dismissals, including myself."

But Finch paid tribute to Warner, who has been in superb form since returning to top level international cricket at this tournament following a 12-month ban for his part in last year's ball-tampering scandal in South Africa.

"He played magnificently today. It is never easy when you are losing wickets at the other end," Finch said.

"He showed his class today and it was an unbelievable knock to get 122.

"That was as good an innings he could have played. He is a big game player."

There was also praise for Warner from closer to home with his wife Candice, who gave birth to the couple's third daughter in London last week, tweeting: "Well done my love @davidwarner31 on another terrific century for your country.

"I know the result wasn't what the team was after but what a week you've had. "Isla got to watch her daddy for the first time today and you didn't disappoint. We love you. #proud."

Well done my love @davidwarner31 on another terrific century for your country. I know the result wasn’t what the team was after but what a week you’ve had. Isla got to watch her daddy for the first time today and you didn’t disappoint. We love you. #proud pic.twitter.com/p2rkbk4Cc2