ICC's outgoing CEO Dave Richardson accepted that even if they have foolproof security, it can never really be enough. 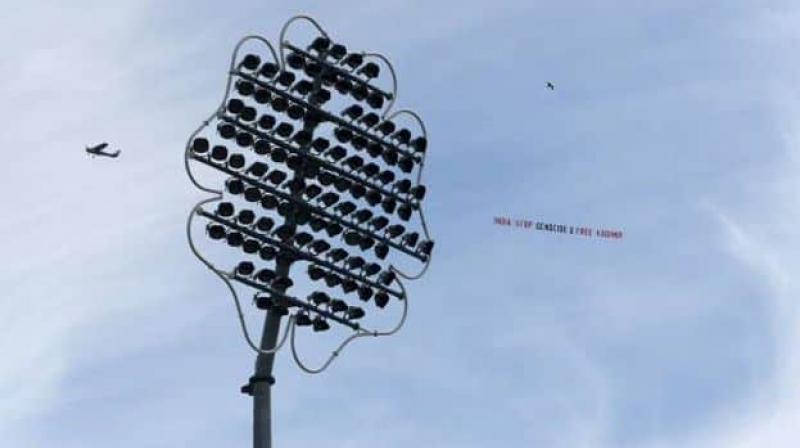 In yet another incident with political overtones, planes displaying anti-India banners flew over the Headingley ground during the World Cup match between India and Sri Lanka on Saturday. (Photo:AFP)

Leeds: Aircrafts flying over the Headingly Stadium with anti-India banners is "unacceptable", a miffed BCCI has said while raising concerns over the safety of its players with an "incredibly disappointed" and red-faced ICC.

In yet another incident with political overtones, planes displaying anti-India banners flew over the Headingley ground during the World Cup match between India and Sri Lanka on Saturday.

The unsavoury incident has prompted the BCCI to file a written complaint with the International Cricket Council.

Minutes after the match began, an aircraft carrying a message 'Justice for Kashmir' flew above the ground.

After half an hour, a similar looking aircraft flew over the stadium with a different banner 'India Stop Genocide, Free Kashmir'.

"This is completely unacceptable. We have written to the ICC, raising our concerns about what happened in Headingley. If this kind of incident is repeated in the semi-finals, it will be really unfortunate. Safety and security of our players is paramount," a senior BCCI official, who is privy to the Board's plan of action told PTI.

During the match between Pakistan and Afghanistan, where clashes broke out between the fans of either nation, jets carrying anti-Pakistan banners unfurled over the stadium here. The slogans demanded an end to alleged 'forceful disappearances' in the strife-torn Balochistan.

A few fans were evicted for engaging in brawl inside the stadium premises.

The ICC has zero tolerance for political or racist slogans and expressed their disappointment at another security breach within 10 days.

"We are incredibly disappointed this has happened again. We do not condone any sort of political messages at the ICC Men's Cricket World Cup," the ICC said in a statement.

Yorkshire, in the north of England, is known for having a sizable Pakistan population with Bradford being their ghetto.

"Throughout the tournament we have worked with local police forces around the country to prevent this type of protest occurring. After the previous incident we were assured by West Yorkshire Police there would not be repeat of this issue, so we are very dissatisfied it has happened again," the ICC statement added.

It has been learnt that the air space above Old Trafford in Manchester and Edgbaston in Birmingham will be turned into 'No-Fly Zone' during the two semifinals on July 9 and July 11, respectively.

The ICC has been given assurance by the Manchester and Yorkshire police authorities in this respect.

ICC's outgoing Chief Executive Dave Richardson accepted during a recent interaction that even if they have foolproof security, it can never really be enough.

Saturday's incident is an indication that local authorities did not do enough as the airspace is their domain.