He was only a last-minute inclusion in the World Cup squad after another left-arm paceman, Junaid Khan, was short of fitness. 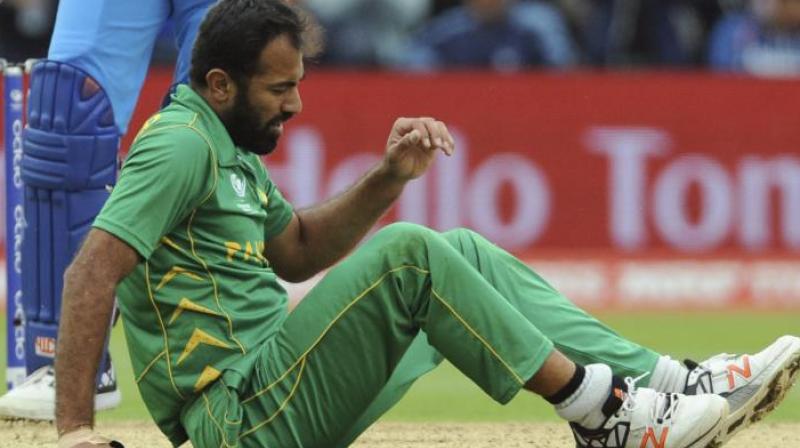 of the sport's finest fast bowlers. "It's a complete change of fate and I am enjoying that," Riaz told reporters on Thursday. (Photo: AP)

Bristol: Pakistan pace bowler Wahab Riaz says he would have been watching the World Cup at home without the help of inspirational advice from Wasim Akram and Waqar Younis.

Riaz was not on the selectors' radar for the World Cup following a costly spell of 8.4 overs which yielded 89 runs against arch-rivals India in Pakistan's Champions Trophy match two years ago.

He was only a last-minute inclusion in the World Cup squad after another left-arm paceman, Junaid Khan, was short of fitness and form in the one-day series defeat against England just prior to the tournament.

But the 33-year-old has made the most of his unexpected chance thanks to pep talks from his idols Wasim and Waqar, the former Pakistan stars regarded as two of the sport's finest fast bowlers.

"It's a complete change of fate and I am enjoying that," Riaz told reporters on Thursday.

"I would have been watching the World Cup in my drawing room and praying for Pakistan team.

"But I am here taking wickets and getting inspiration from Wasim, who I watched bowling in my childhood and idolised all my career, and my former coach Waqar. They are inspiring me here."

Riaz led the Pakistan attack with 3-82 in his team's surprise 14-run win over tournament favourites England on Monday and immediately gave the credit to Wasim and Waqar.

"I met Wasim and Waqar last week and they told me not to fear anyone. Wasim told me that I looked great and those words inspired me a lot," he said.

Riaz admitted he needed words of encouragement after his disappointing form in recent years.

"When you are not in the team then you need encouragement and the two great bowlers helped me get back to my full confidence," he said.

After a dismal opening match defeat against the West Indies, Pakistan kick-started their World Cup campaign at England's expense on Monday.

Now they will look to build on that confidence-boosting success against Sri Lanka in Bristol on Friday.

"We know that it was just one win. We need to cover nine steps before the semi-final so we must cover them slowly and gradually," Riaz said.

As the battle to be the World Cup's top wicket-taker heats up, Riaz feels the hype around Jasprit Bumrah will put pressure on India's pace spearhead.

"Bumrah has been doing well," Riaz said after Bumrah took 2-35 in India's opening game win over South Africa on Wednesday.

"Obviously, he has played just one game (in this World Cup), but has been doing well in the recent past. If he is rated to be the best bowler in this event then he will have more pressure of that.

"Bowlers are all good but whoever does well on the day will be rated as the best."