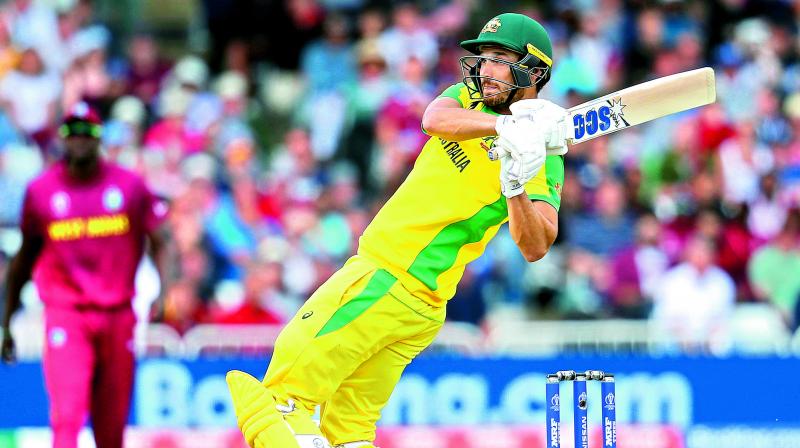 Nottingham: Australia extended their 100 per cent start to their World Cup title defence with a 15-run win against the West Indies at Trent Bridge here on Thursday.

Nathan Coulter-Nile (92) hammered the best World Cup score by a number eight as Australia recovered from 38 for 4 to post 288 all out. Pace bowler Mitchell Starc then took five wickets as Australia survived a tense run-chase, featuring 68 from Shai Hope, to restrict the West Indies to 273 for 9 and make it two successive victories.

Earlier, former captain Steve Smith (73) put on 102 for the seventh wicket with Coulter-Nile to repair the Australian innings.

“It was the sort of wicket where you have to take your time and get used to the bounce. Some balls seemed to rear up and the short balls felt really quick. I don’t know if it’s the pitch or their bowlers,” said Coulter-Nile, who was dropped on 61 by Shimron Hetmyer.

The West Indies had bounced out Pakistan for just 105 when winning their tournament opener at Nottinghamshire’s headquarters last week and adopted similar tactics after captain Jason Holder won the toss on a sunny day.

Oshane Thomas struck first when Australia captain Aaron Finch (6) was caught behind off a lifting delivery.

David Warner (3) was then caught at backward point off Sheldon Cottrell that saw the left-arm quick — still a member of the Jamaica Defence Force — celebrate with his trademark salute.

Australia were now 21 for 2, with boos ringing out as Warner walked off and Smith walked on — a now familiar response by crowds in England to the pair having only recently returned from year-long bans for their part in a ball-tampering scandal in South Africa.

Usman Khawaja was twice hit on the body on Thursday before an edge off Andre Russell was brilliantly caught one-handed by diving wicket-keeper Shai Hope.

Australia’s 36 for 3 was quickly transformed into 38 for 4 when Glenn Maxwell was out for a second-ball duck, a top-edged skyed hook off a Cottrell bouncer comfortably held by Hope.

Left-hander Alex Carey (45) gave Smith some sound support in a stand of 68 before he was caught behind off Russell.