The Indian selectors will pick squads for 6 series, including India A tour of England, on Tuesday. 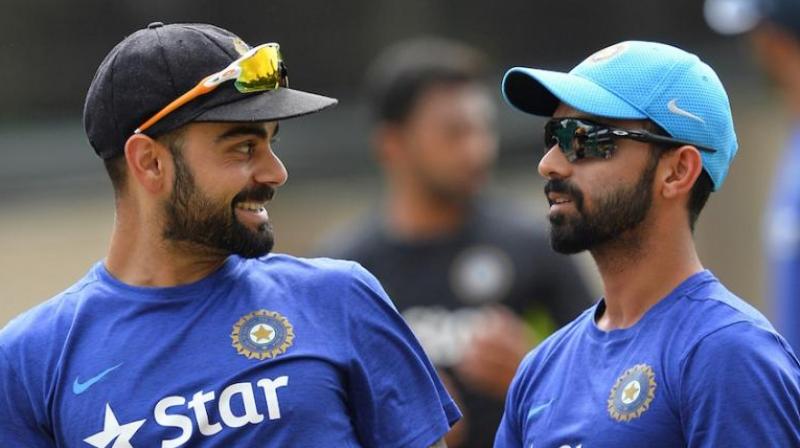 While Virat Kohli won’t feature in India-Afghanistan Test in June as he will be playing County Cricket ahead of England tour, Ajinkya Rahane may lead the team in Kohli’s absence. (Photo: AFP)

Mumbai: With Virat Kohli opting to play County Cricket to prepare for England series and miss the one-off inaugural Test against Afghanistan, it is learnt that Ajinkya Rahane will lead the Indian team for the June 14-June 18 Test in Bengaluru.

Indian selectors will pick as many as six squads on Tuesday – India A squad for England tour, India’s squad for three-match ODIs and three-match TwentyT20Is against England, squad for two Twenty20s against Ireland and  India A team for tri-series against England A and West Indies A – and quite a few spots will be up for grabs. While Kohli won’t be a part of Indian squad for Afghanistan Test, he will be in Ireland, where India will play 2 T20Is ahead of a gruelling England tour. India will be playing three ODIs, three Twenty20s and five Tests in England.

It is reported that KL Rahul, Murali Vijay, Dinesh Karthik and Krunal Pandya – Mumbai Indians’ all-rounder and Hardik Pandya’s brother – are in the reckoning to be picked in India A squad.

“Expect Pandya to be part of India’s T20 team, the way he’s been going about with his game,” a senior BCCI official was quoted as saying by The Times of India.

Karthik has impressed one and all with his performances in domestic cricket and his Nidahas Trophy final heroics will work in his favour as he is expected to get a place in India’s limited-overs squads.

“Expect the batsmen to get a lot of playing hours and a very balanced work-chart for the pacers,” added the official.