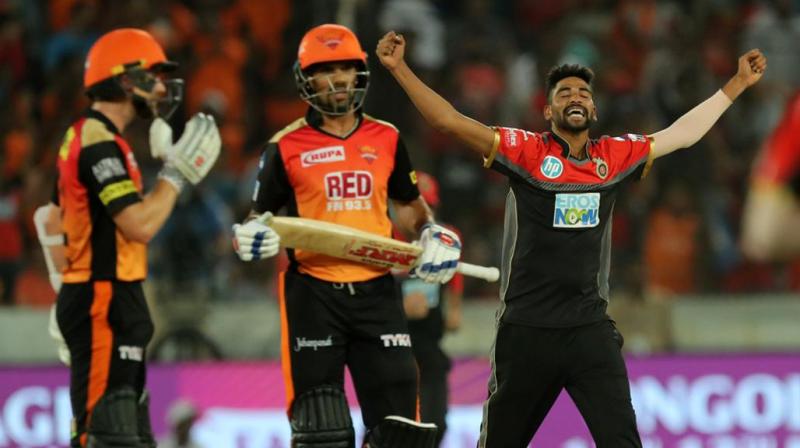 Hyderabad: Bhuvneshwar Kumar produced a spectacular final over as Sunrisers Hyderabad beat Royal Challengers Bangalore by 5 runs in a nail biting match at Rajiv Gandhi International Stadium on Monday. Bhuvi bowed a brilliant last over conceding just 6 runs to seal the deal for the Orange army.

Chasing 165 runs for victory RCB openers Manan Vohra and Parthiv Patel went after SRH bowlers right from the word go. Parthiv’s innings was cut short by Shakib , when he had him trapped in front of stumps for 20 runs. Manan Vohra was the next to go, when he was bowled by Sandeep Sharma

Virat Kohli was given lifeline, when he was dropped by Kane Williamson at first slip, when on 33 runs of Rashid Khan’s bowling.  His innings was short lived as Shakib Al Hasan dismissed him for 39 runs.

AB de Villiers and Moeen Ali too fell in quick succession as RCB looked like crumbling in the run chase. De Grandhomme and Mandeep Singh slowly began to tilt the match in RCB favour as both the batsmen began to find runs with ease.

Grandhomme began to use long handle as he hit Rashid Khan for two sixes to make the chase more interesting. With 12 needed of the final over Bhuvneshwar Kumar conceded just 6 runs as RCB season came to an end.

WICKET! Moeen Ali  goes, SRH in control. The batsman trying to pull away going delivery only to find faint edge as Saha takes an easy catch.

WICKET! Rashid Khan has turned the match in SRH favour. Ab de Villiers seed his stumps being castled by ripper of a delivery from the Afghan spinner.

After 24 run opening stand, Manan Vohra and skipper Virat Kohli looked like taking the game away but their 36 run stand was finally broken by Sandeep Sharma. RCB has s far managed to do well in the run chase and with Kohli dropped by Williamson. The dropped catch did not prove costly as Yusuf Patahn pulled off a stunning one handed catch to dismiss RCB skipper.

WICKET! Sandeep Sharma has done it for SRH, Manan Vohra is clean bowled. The ball takes inside edge of the bat and hits the pad before hitting the stumps

Dream start for SRH, only 146 runs to defend and Shakib gives a perfect start with wicket of Parthiv Patel. Will RCB hang on or will SRH bowlers once again run through opposition batting lineup.

WICKET! Shakib Al Hasan has done the trick for Kane Williamson as he traps Parthiv Patel in front of stumps. The batsman going for slog sweep but misses the quicker ball completely. What a start for SRH

Winning the toss proved to be lucky for RCB skipper Virat Kohli as his bowlers managed to bowl out SRH for 146 runs in 20 overs in the 39th match of Indian Premier League at Rajiv Gandhi International Stadium on Monday. Skipper Kane Williamson was the top scorer with 56 runs. For RCB Mohammed Siraj picked up figures of 3-25

After being put into bat, SRH got off to poor start with Alex Hales dismissed early by Tim Southee for 5 runs. Shikhar Dhawan too did not contribute with the bat as he also fell to short delivery of Mohammed Siraj for just 13 runs.

Manish Pandey was the third wicket to fall. The Karnataka batsman had a dismal season so far and the form with the bat continue to haunt him as he  fell to Yuzvendra Chahal , giving away easy catch to Virat Kohli.

Kane Williamson and Shakib Al Hasan then came together to put on 64 run stand for the 4th wicket. Williamson also completed his half century as SRH looked for strong finish in the final 5 overs. Umesh Yadav broke the partnership when he had Williamson caught by Mandeep Singh for 56 runs.

Shakib tried to give boost to SRH innings, but  his innings was cut short by Southee for 35 runs. It was flurry of wickets in the end as SRH were finally bowled out.

WICKET!  Shakib Al Hasan tries to give push to SRH innings, but Southee dismisses him for  35 runs, caught by Umesh Yadav at backward square leg.

WICKET! Umesh Yadav jhas got the big breakthrough, Kane Williamson , who had just scored 50 is gone caught at long leg by Mandeep Singh.

Kane Williamson has been scoring consistently with bat for SRH. The skipper gets yet another half century and also helps hi steam reach 100 run mark. With 5 overs to go will SRH be able to reach a huge total.

RCB bowlers have completely dominated the first half of the innings as they they have already  sent 3 SRH players back to dugout. Will RCB continue to have upperhand or will SRH bounce back in the final 10 overs?

WICKET! Sunrisers in more trouble. Manish Pandey continues to struggle with the bat. Chahal gets his first wicket of the match with soft dismissal of SRH batsman, who gives an easy catch to Virat Kohli. Pandey looks frustated and Chahal looks surprised.

WICKET! Local boy Siraj has got the danger man Shikhar Dhawan. What a huge blow for SRH. Short ball from the bowler and Dhawan plays pull shot. The shot did not not have enough power and goes straight into the hands of Southee at deep backward square.

Slow start for Sunrisers Hyderabad after losing their opener Alex Hales who was clean bowled by Tim Southee for just 5 runs. Hales had scored half-century in the previous match.

WICKET! Tim Southee with the big breakthrough. The pacer uproots Tim Southee's middle stump and SRH have lost their opener. A cross seam delivery by Southee on the middle stump, Hales trying to work the ball on the on side, but closes the face of the bat early.

RCB make two changes to their side.  Manan Vohra comes in for Murugan Ashwin while Moeen Ali replaces Brendon McCullum

Ahead of the clash, moods in both camps are very much different. SRH are comfortably sitting at top of the table , while RCB has a season to forget and are staring at a possible elimination.

The Sunrisers are on a roll with four successive wins. Their win against Delhi Daredevils in the last game saw Alex Hales firing at top of the order has come as blessing for SRH in absence of talismanic David Warner . Yusuf Pathan's power hitting at the end in the last game has brought a breath pf fresh air.

The bowling of SRH is certainly one of the top quality attacks of this season IPL. Pacers Siddharth Kaul , Basil Thampi and Sandeep Sharma have steeped up in absence of Buvneshwar Kumar. Bhuvi’s comeback in the last game have made their pace attack even more dangerous.

The spin department has been led by Rashid Khan , who has been performing brilliantly this season. Shakib Al Hasan and Pathan are another solid options.

In stark contrast, the Royal Challengers have had another disastrous season. While Virat Kohli and AB de Villiers have been scoring with the bat other batsman like Brendon McCullum and Quinton de Kock have been inconsistent with the bat at the top. Parthiv Patel’s performance in the last game proved that he is capable of giving starts at top of the order. Mandeep Singh has also been inconsistent with the bat, which has been a cause of concern for the Bangalore side .

Their bowling department have also failed to defends match winning totals, with bowlers leaking runs and not been able to pick up wickets consistently. Umesh Yadav has been the shining star for RCB, while Yuzvendra Chahal has failed to make major impact, which has hit RCB badly.

A loss in todays game could bring the curtains down on RCB's season and the chance to qualify for play-ofs will also diminish.