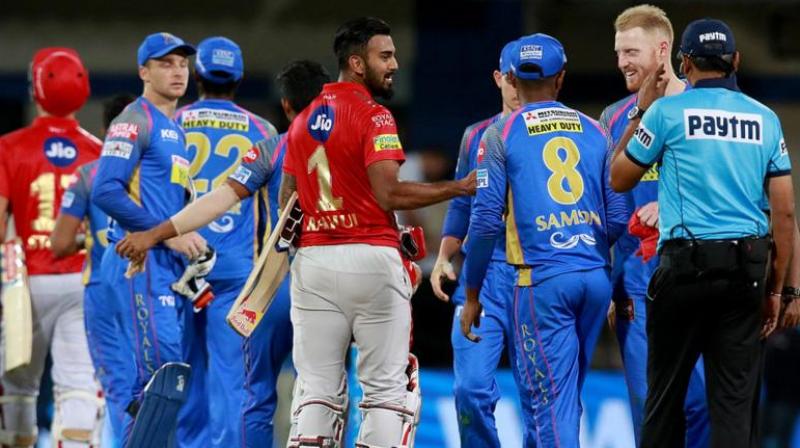 Mujeeb's 3-27 restricted Rajasthan to 152-9 as its multi-million dollar signings were baffled by the young Afghan spinner after Kings XI captain Ravichandran Ashwin opted to field. Kings XI then scored 155-4 in 18.4 overs.

Mujeeb started Rajasthan's slide when Ben Stokes was caught at long off after Mayank Agarwal leapt close to the boundary edge, caught the ball over his head and while going off balance relayed the ball back to Manoj Tiwari to complete the catch.

Top scorer Jos Buttler (51) was outfoxed with a carrom ball and was caught behind before Mujeeb clean bowled Jofra Archer with a perfect googly off the next ball as Rajasthan lost its last six wickets for 52 runs.

Kings XI's opener Lokesh Rahul (84 off 54 balls) continued his supreme run of form and, despite losing Chris Gayle and Agarwal early, he carried the team to its sixth victory in the tournament.

"For me, this is the first knock that I would be really satisfied with because I won the game for the team," Rahul said.

Rahul hit seven fours and three sixes in his third half-century in this year's IPL and shared a 68-run stand with Marcus Stoinis, who remained unbeaten on 23.

Rajasthan is at the bottom of the table with only three wins from nine matches.

"It wasn't easy to bat on here, but we needed 170-175," Rajasthan captain Ajinkya Rahane said.

"We need to learn from this, it's our ninth game, the bowlers are doing well but the batsmen, including me, haven't performed well enough."

In Mumbai, Hardik hit an unbeaten 35 off 20 balls to lift his team to 181-4 after Kolkata captain Dinesh Karthik chose to field.

Hardik then took 2-19 to restrict Kolkata to 168-6 as Mumbai moved to fifth with eight points from four wins. Kolkata slipped to fourth with 10 points after winning five of its 10 games.

Kolkata seemed to be cruising to victory after Robin Uthappa (54) capitalized on an early dropped catch to hit his first half-century in this year's IPL.

Uthappa and Nitish Rana (31) featured in an 84-run third wicket stand after Mayank Markande dropped an easy chance at mid-on when Uthappa was on 4.

Uthappa pounced on the chance, hitting six fours and three sixes, including four successive boundaries in one over off Ben Cutting.

But Markande broke through in the 13th over when Uthappa holed out in the deep to Cutting and Hardik dismissed Rana in the next over to reduce Kolkata to 115-4.