SA spinner's latest trick is to take a large red handkerchief out of his pocket and, with flick of his wrist, turn it into metre-long wand. 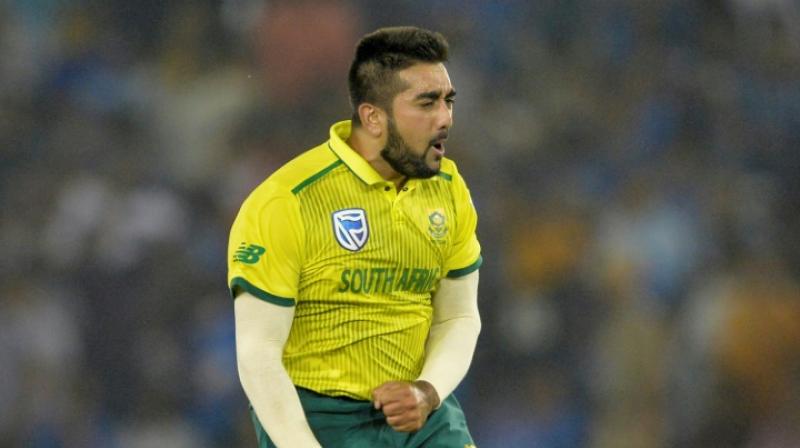 Before he became a full-time cricketer, South African spin bowler Tabraiz Shamsi wanted to become a professional magician. Now Shamsi has brought his old passion to the cricket field. His extravagant celebrations after taking a wicket have attracted social media interest across the cricket-playing world. (Photo:AFP)

Now Shamsi has brought his old passion to the cricket field. His extravagant celebrations after taking a wicket have attracted social media interest across the cricket-playing world.

The left-arm wrist spinner's latest trick is to take a large red handkerchief out of his pocket and, with a flick of his wrist, turn it into a metre-long wand.

"I have always wanted to enjoy myself on the cricket field," Shamsi told AFP on Friday.

"There's a lot of pressure playing professional cricket and sometimes you forget why you started playing cricket in the first place.

"It's a bit of fun. Not everyone likes it but my intentions are all good. I want to get more kids to enjoy the game."

Playing for the Paarl Rocks in South Africa's Mzansi Super League Twenty20 competition, Shamsi is the competition's joint second-highest wicket-taker with 12 wickets in seven matches at an average of 18.00, conceding a relatively economical 7.20 runs an over.

With one league match to go, the Rocks are well-placed to make the three-team play-offs.

"Before cricket became serious for me, at the age of about 15, I wanted to be a professional magician," said Shamsi, 29, who has played in two Tests, 17 one-day internationals and 16 T20 internationals for South Africa.

He first attracted attention for his celebrations with a dance move -- "some people called it the bus driver dance" -- which he unveiled while playing for Royal Challengers Bangalore in the Indian Premier League in 2016.

He then came up with a mock telephone call, taking off a shoe and pretending it was a mobile phone, while playing for St Kitts and Nevis Patriots in the Caribbean Premier League two years ago.

The trick with the wand is his latest and most elaborate move.

"It takes a lot of practice to get things right and I have to be aware of the television cameras so they don't see exactly what I do," he said.

There could be more to come.

"I'm always thinking of something new -- but the most important thing is still the bowling. If there are no wickets, there are no celebrations."