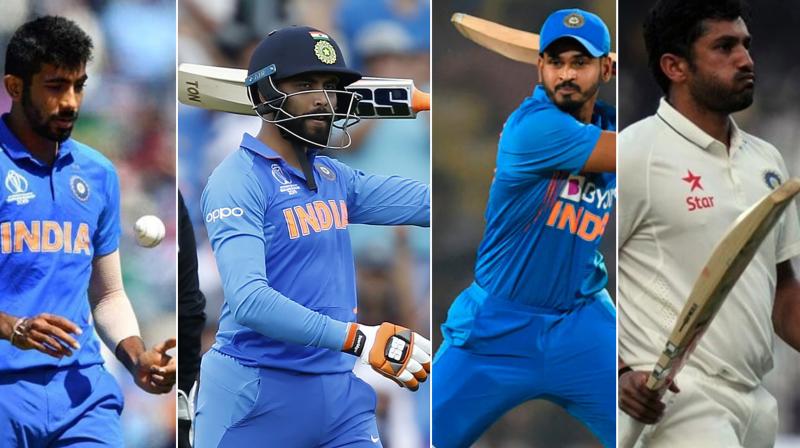 The Board of Control for Cricket in India (BCCI) on Friday extended birthday greetings to four Men in blue cricketers -- Jasprit Bumrah, Ravindra Jadeja, Shreyas Iyer and Karun Nair. (Photo:AP/AFP)

BCCI shared a small clip on Twitter and captioned the post as: "Birthday wishes for our 4 birthday boys - Happy Birthday @imjadeja @Jaspritbumrah93 @ShreyasIyer15 and @karun126 #TeamIndia".

Bumrah, who turns 26 today, has been out of cricket action for over three months now after suffering from a lower back injury.

The pacer who last played a Test for India in July this year is still among the top ten bowlers in the longest format of the game. He is currently ranked at the fifth position.

While in the ODI format, he is at the pole position.

All-rounder Jadeja has had a remarkable year with the bat and has registered 494 runs in just 11 innings.

Iyer made his foray into both ODI and T20I lineups this year and has been able to cement his place in the Indian lineup. He last played a match-winning knock against Bangladesh in the third and final T20I.

Nair last played a match for India in 2017, however, his greatest feat came in 2016 against England as he went on to score a triple century at Chennai.

However, after that knock, the batsman was dropped for the next Test match.