Sri Lanka’s chase in a haze

India close in on big win as Sri Lanka totter at 31/3. 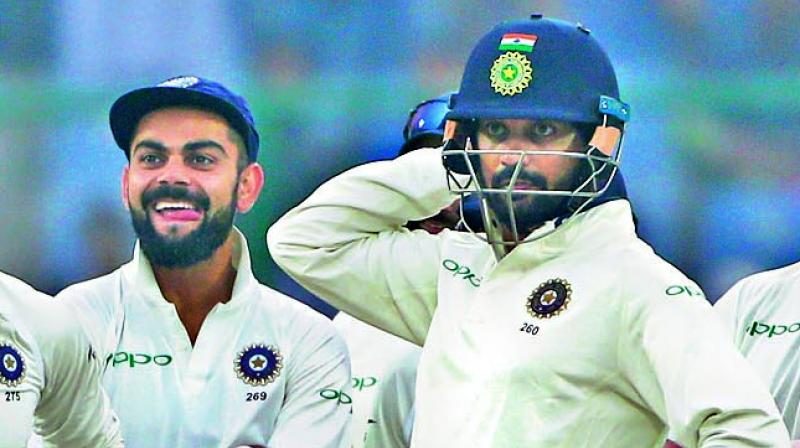 New Delhi: Even as pollution and smog-related issues returned to take centrestage, India launched their push for victory on day four of the third and final Test match against Sri Lanka at the Kotla here, the visitors reeling at 31/3 after being handed a 410-run victory chase.

Sri Lanka fielded through the day with nine of their men in masks even as the local association and the cricket control board went into damage control mode. The DDCA brought in a doctor to run tests on the Lankan players who claimed to be in distress, while the BCCI announced there would hereafter be a rethink in scheduling matches in Delhi between November and January.

And in all of this, India seamer Mohammad Shami, already under the weather, was in obvious distress in his three-over opening spell, bringing up his lunch midway through the stint that also fetched the wicket of opener Sadeera Samarawickrama.

Ravindra Jadeja then came into his own, spelling danger with almost every delivery to see off opener Dimuth Karunaratke and nightwatchman Suranga Lakmal. The former feathered an edge to Wriddhiman Saha behind the wickets while Lakmal was bowled by a sharply in-dipping ball.

Jadeja himself was unaware he had got the ball through to the stumps while Lakmal held his ground for a long time in disbelief. With three batsmen gone, the visitors have a mighty task on hand to save the match, prevent a 0-2 scoreline, and let India get their record-equalling ninth series win in a row.

Earlier, having dismissed Sri Lanka quickly this morning, the home side set out in chase of quick runs, posting 246/4 in just 52.2 overs with Shikhar Dhawan, Virat Kohli and Rohit Sharma contributing half-centuries and Cheteswar Pujara chipping in with a brisk 49.

India lost Murali Vijay early, caught behind off Lakmal, the quick being one of the three Lankans to be examined during the lunch interval. Ajinkya Rahane was pushed up the order to given him some time at the crease after speculation around whether he would be axed for the South Africa series had ended on Monday evening.

Yet again, though, the off-colour India vice-captain failed to build a score of substance, trying to hit his way out of the run-drought in 37 balls at the crease and only skying off-spinner Dilruwan Perera to Lakshan Sandakan at long on. Rahane has endured a truly wretched series, totalling just 17 runs in five completed innings.

Dhawan though was untroubled and hit five boundaries and a six on his way to an attractive 67 (176m, 91b). He and Pujara put on 77 runs for the third wicket in just 16-odd overs, the latter using his feet well to the spinners and cracking five boundaries in his 66-ball 49.

Kohli and Dhawan came together next to push things along till the left-hander was caught behind off the left-arm spin of Sandakan. It set the stage for the brightest phase of the India second innings as both Kohli and Rohit indulged in some flowing strkeplay, using drives, cuts and pulls to good effect as they put on 90 quick runs in just 15 overs and carry the target past the 400 mark.