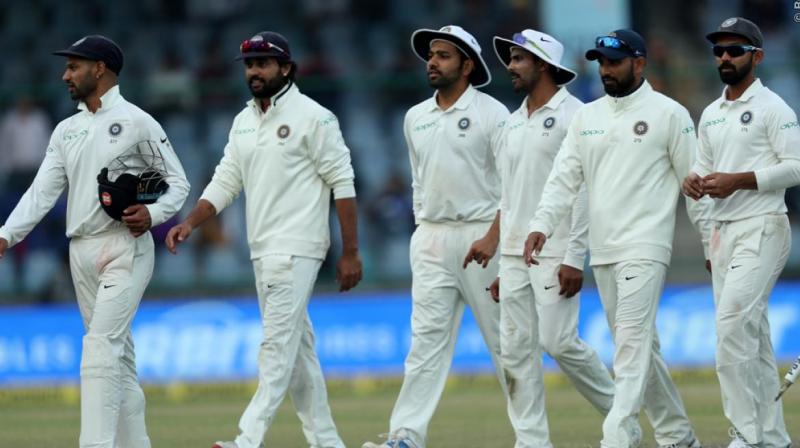 New Delhi: Team India clinched the three-match-Test series 1-0 after Sri Lanka managed to snatch draw from jaws of defeat in the third and final Test at Feroz Shah Kotla in New Delhi on Wednesday.

Dhanajaya de Silva was the star for the visitors as he remained retired hurt on 119. Roshan Silva also scored half-century to remain unbeaten on 74.

Indian pacers Mohammed Shami and Ishant Sharma as well as lethal spin duo of R Ashwin and Ravindra Jadeja failed to pick up wickets as under fire Lankan batsman manged to hold on their own against the strong Indian attack.

Sri Lankan’s who were bundled out 373 in their first innings, were faced with a daunting  task of  chasing a target of  410 runs . After losing three wickets on fourth day, Dhananjaya led from the front for visitors on the final day as Lankan batsman managed to share the honours with the hosts to achieved their objective with aplomb.

FIFTY! Roshen Silva gets to his maiden international fifty on his debut for Sri Lanka. Will this be a match-winning effort?

The visitors just need 167 runs to win the Test match, and will put all the effort to clinch a series-levelling win. Will Roshen Silva and Niroshan Dickwella take the visitors ahead?

Its tea on the final day of the third test match, Sri Lanka still need 184 runs to win the game. Dhananjaya’s century has certainly brought Sri Lanka back in the match.

Indian bowlers had to toil hard in both the session but only managed to pick up two wicket in two session.  Dhananjaya walked off the field after injuring his thigh, India now stand a chance to go for kill. The final sessionis expected to be hard fought contest between both the teams.

Bad news for Sri Lanka as Dhananjaya walks off. The batsman struggled with what looked like a cramp much earlier and now he has decided to walk off as it became impossible for him to bat.

Dhananjaya de Silva has put Indian victory on hold with a gritty century. With just one more session left to play Sri Lanka will be hoping  that de Silva continues to bat on.

Century for Dhananjaya de Silva, fantastic knock under pressure, his third century. After losing Mathews early de Silva stepped up  his game as he comfortably played spin, while struggling to deal with pacers. Indian bowlers have failed to break De Silva’s resilience. The batsman has so far stood like a wall and if he continues to play well Sri Lanka might end up saving the match.

WICKET! Ashwin removes dangerous Chandimal. Big blow for Sri Lanka, The Lankan skipper was looking good, ubntil he went for  the delivery flighted by Ashwin. The ball tkes inside edge of the bat to hit his off stump.

Dhananjaya and Chandimal are batting really well as both of themhave put on 100-run partnership to steady Sri Lankan innings.

It has been Sri Lanka all the way in the opening session on the final day of the third and final Test match at Feroz Shah Kotla. Dhanajaya de Silva leading the way with gutsy half-century, Sri Lanka skipper Dinesh Chandimal also supporting him at the other end.

Birthday boy Ravindra Jadeja was the only successful bowler for India as he dismissed Angelo Mathews for just 1 run. The left arm spinner could have added Chandimal’s wicket, but he bowled a no-ball to give a lifeline to the batsman. With two more session to play it remains to be seen if Sri Lankan batsman can hang on to earn a draw.

Ravindra Jadeja has bowled no ball to hand Sri Lankan skipper Dinesh Chandimal a lifeline.  The ball pitched on off gripped the surface and turned a little to knock his off stump. The umpire went upstairs to check for no- ball, and the replay showed that there was no foot behind the line.

Sri Lanka has done well in the opening session as Dhananjaya and Chandimal ensured Lankans get past 100 run mark. Inspite of losing Mathews early, Dhanajaya stayed at the crease and completed his half century. The middle order batsman now has his eye set on reaching the three figure mark.

Fantastic batting by Dhananjaya de Silva as he scores his third half-century in the test.

Drinks break for the players. India have managed to get all important wicket of Mathews in the first hour of play. Dhananjaya have so far managed to stay on the wicket and looks set for big innings. Chandimal who scored century in the first innings, once again will have to play match saving knock.

Indian bowlers have so far bowled really well to keep pressure on Sri Lanka. Ishant Sharma and birthday boy Ravindra Jadeja who started the proceeding bowled back to back maiden overs. Jadeja provided the breakthrough by getting the wicket of Angelo Mathews.

WICKET! Ravindra Jadeja has strikes the first blow, Angelo Mathews after scoring just 1 run. Jadeja , tossed up the ball tad wider of off stump , Mathews lunged forward for the defensive push, but the ball turned and then bounced, taking the edge and flying into hands of Rahane  who made a tough catch look easy.

Indian bowlers Ishant Sharma and Ravindra Jadeja bowled back to back maidens to deny free runs to Sri Lankan batsman.

New Delhi:  Team India are the favourites to win the third test match against Sri Lanka currently underway at Feroz Shah Kotla in New Delhi. Virat Kohli and his team will look to wrap up Sri Lanka innings quickly on the fifth and final day.

India eventually declared their second innings at 246/5 to set Sri Lanka target of 410 runs for victory.

Chasing a huge target Sri Lanka needed good start from openers. Indian bowlers Mohammed Shami and Ravindra Jadeja had other ideas as they reduced Sri Lankan to 31/3 before end of days play to hand India  advantage going into the final day.

Sri Lanka opener Sadeera Samarawickrama was the first batsman to be dismissed as he edged Shami to Rahane in slips. Ravindra Jadeja delivered the knockout punch before end of days play as he dismissed Dimuth Karunaratne and night watchman Suranga Lakmal in space of three balls.

The onus will be on first innings centurions Angelo Mathews and Dinesh Chandimal to once again pull Sri Lanka out of trouble and salvage a draw on the final day.