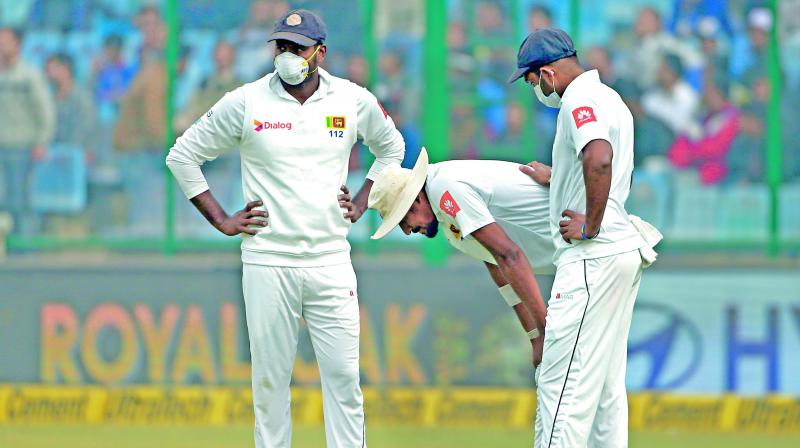 New Delhi: Were Team India being brave, or foolish, when they were in the field during Sri Lanka’s first innings of the ongoing third Test against Sri Lanka at the Kotla here on Monday?

That question begs answering for on Tuesday, when Sri Lanka returned to field in the Indian second innings, every player bar the bowler and wicket-keeper Niroshan Dickwella wore a mask on a day the Air Quality Indiex (AQI) was better at 272, the “very unhealthy” mark as against the 400-plus AQI level (“hazardous”) that prevailed when India were in the field.

On Tuesday, Sri Lanka quick Suranga Lakmal vomited twice between overs, the detritus being quickly covered over with bucketfuls of sawdust.

On the day, the host association, the Delhi and District Cricket Association summoned a specialist from the All India Institute of Medical Sciences, Dr A.P. Bhalla, Professor, Department of Anesthesia, Pain and Critical Care to run checks on the Sri Lankans. He also interacted with match referee David Boon on pollution levels in the area and the risks associated with it.

The national president of the Indian Medical Association, Dr K.K. Aggarwal, was on Tuesday quoted as saying, “Any player who comes from a country where the AQI level is less tan ours will not be able breathe in such a situation… They it is not fair to expose them to such air quality.

“They shouldn’t have started the match. It is dangerous and not medically advisable and that is why the Sri Lankan players protested.

“The masks were more a protest than to face poor air quality.”

Said The Guardian of London, “Delhi officials have often been accused of not preparing for what has become an annual crisis each winter, while the Indian government has played down the urgency and health risks associated with the problem.”