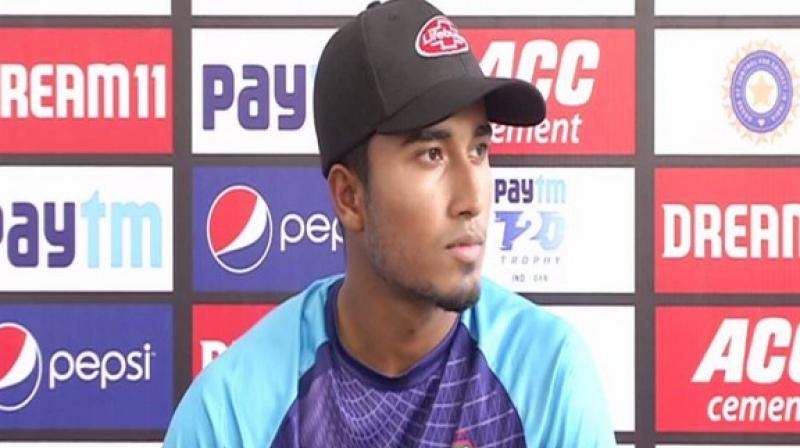 Bangladesh all-rounder Afif Hossain on Tuesday said that skipper Mahmudullah told the team to play as a collective unit in the ongoing three-match T20I series against India. (Photo:ANI)

Rajkot: Bangladesh all-rounder Afif Hossain on Tuesday said that skipper Mahmudullah told the team to play as a collective unit in the ongoing three-match T20I series against India.

"Our captain Mahmudullah told us to do whatever we do best. He told us that we should play as a unit. It was our team plan to be aggressive on the field. In the last match, I did not get a chance to bat, so I tried to give my all with the ball in hand. When I will get the chance with the bat, I will strive to do my best," Hossain told reporters.

"We are pretty confident after winning the first match. We are feeling good and we are raring to go for the second T20I. We are training hard to tackle the pitch and weather conditions. The facilities are good here," he added.

The all-rounder also said that he did not get a chance to bat in the first T20I, but he tried to the maximum number of dot balls when he had the ball in his hand.

He also said that the side is not focusing on winning the series right now, the team is just taking one game at a time and trying to put their best foot forward.

"When I had the ball in hand, I focused on bowling the maximum number of dot balls. It is my first time playing in India, so I am trying to learn the most out of this series. We are not focusing on winning the series, we are just trying to give our best performance," Hossain said.

"Our senior players always help the youngsters in the squad. Our coach Russell Domingo has always given us the freedom to play our natural game. We practiced as a collective unit and each player in the squad is trying to give their best for the side," he added.

Ahead of the series against India, Bangladesh lost its two key players--Shakib Al Hasan and Tamim Iqbal.

Shakib was handed a two-year ban with one year of it being suspended by the International Cricket Council (ICC) for not reporting a match-fixing offer to the apex cricketing body's Anti Corruption Unit (ACU) while Tamim opted out of the tour due to personal reasons.

India will take on Bangladesh in the second T20I of the three-match series on Thursday, November 7.