Siraj, 23, was given the second over to bowl and overall he gave away 53 runs for the prize wicket of New Zealand captain Kane Williamson. 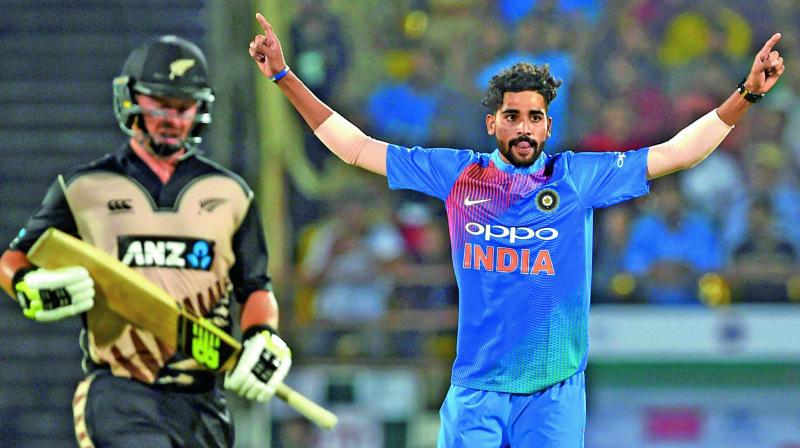 Mohammed Siraj conceded 53 runs from the four overs he bowled in the second T20 against New Zealand. (Photo: PTI)

Rajkot: Jasprit Bumrah has backed debutant fellow-India pacer Mohammed Siraj to learn from his mistakes and come good in future after he received a hammering from New Zealand batsmen in the second T20I here.

Siraj, 23, was given the second over to bowl and overall he gave away 53 runs for the prize wicket of New Zealand captain Kane Williamson.

“It’s okay, it was his first game. On a difficult wicket it’s always difficult (to bowl). He’s coming into the new team, so it takes time for a bowler to adjust. He’ll learn,” said Bumrah after the hosts slumped to a 40-run defeat against the Black Caps who levelled the three-game series 1-1.

“As a bowler when you get hit, you learn a lot. So I think after this experience he’ll be a better bowler when he comes into the next match.”

Bumrah, who returned with impressive figures of 0/23 even as the visitors ran up a huge total of 196/2 by riding on opener Colin Munro’s belligerent knock of 109 not out, was seen chatting with Siraj during the latter’s spell.

“I was just saying that as a bowler when you get hit, you learn. It’s difficult because as a bowler, on this wicket, it was challenging and for a new guy to come in against such opposition it’s difficult,” he said.

“I was just trying to give him confidence, that it’s ok, every bowler goes for runs, you get hit. But this is how you’ll learn and you’ll come back, so I’m sure that whenever he plays more, he’ll be better than before. I think he’ll be better in the next match,” said Bumrah, who made his India debut against Australia Down Under in January, 2016.

Terming the playing deck at the SCA Stadium as a challenging one for the bowlers, Bumrah noted that Munro went for his shots and was also lucky to escape being dismissed a few times in his 58-ball innings.

“This was a difficult wicket because when we were bowling with the new ball, it was coming on to the bat really well and they had a good start (105-run stand between Munro and Martin Guptill for the first wicket),” he said.

“We were trying our best and Colin Munro was also going berserk and he was also a bit lucky as well because one or two catches here and there would have been different,” he said.

Munro could have been out on 79 had not Yuzvendra Chahal grassed him off Bhuvneshwar Kumar.

“In this format you are never surprised because on a given day, any batsman can give you... So he was a bit lucky as well, we dropped a few catches. I’m not taking credit away from him, he played really well. He’s done well in the CPL and all the leagues so he had a little bit of experience in that, so he played well,” the Ahmedabad-born bowler added.

Asked why the Indian players opted out of a practice session yesterday, Bumrah said: “We’ve been playing for a long period of time so we were having our recovery and training. We were not just sitting in the hotel and sleeping, we were training there as well. If we had won the match, the sentence (question) would have been different.”