The deciding last game will be played on November 7 at Thiruvananthapuram. 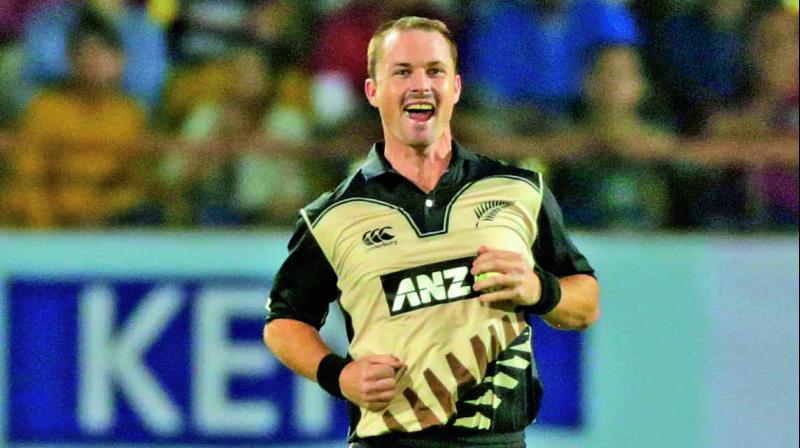 Left-arm pace bowler Trent Boult sent back openers Shikhar Dhawan and Rohit Sharma in the second over to leave the hosts struggling at 11/2, chasing an imposing score of 196/2, built mainly on Munro’s belligerent knock of 109 not out that contained 7 sixes and as many fours.

“(It was) massive. (Grabbing) wickets halts the momentum of the team and those two players are in good form like we saw in the first T20,” said Munro in the post-game press conference.

“They put on a record partnership (158) and for Trent to come out, stand up and lead the attack like he did tonight was outstanding. As was Adam Milne.

“To come out and bowl like they did gave us a lot of momentum and belief and then the spinners (Mitchell Santner and Ish Sodhi) could come in and do their thing knowing that they were behind required rate from the start,” added the South Africa-born player.

The deciding last game will be played on November 7 at Thiruvananthapuram.

On his own sensational knock, man of the match Munro, only the fourth batsman to score two T20 hundreds, said he relished the shortest form of the game.

“I enjoy Twenty20, it’s a game where you know it’s a short game and you go out there to express yourself and when it comes off, it comes off. Sometimes you put too much pressure on yourself in the longer form where you’ve got to score runs all the time,” he said.

“In Twenty20, you just got to go out there and express yourself and take the good with the bad. Sometimes it comes off like it did tonight and the other night it didn’t come off. You just got to go with the flow.”

Talking about his two T20 centuries, Munro said: “Obviously the first hundred you score for your country, it always means a lot against Bangladesh. Again to come to India, play against a tough opposition and score a hundred and bat throughout the innings, means a heck of a lot.

“The wicket was very good. I thought, when the bowlers bowled back of a length, changed their pace a little bit with a straighter line, I did find it quite tough to score. We bowled outstandingly well,” he added.

The left-handed batsman, who put on a century stand (105) with fellow-opener Martin Guptill (45 in 41 balls), said the they have a good understanding.

“I think Guppy had a lot of the strike early and he got off to a good start. He said the wicket was good so just play your natural game. And that helps me, Guppy facing the first couple of balls. I think that’s a tough role because wicket could be sticky, skiddy, so he enjoys taking the first ball.

“The communication we have at the top of the order and throughout our batting is key in order to make (set up) those big targets. Guppy and I get along really well and it just naturally happens,” he said.