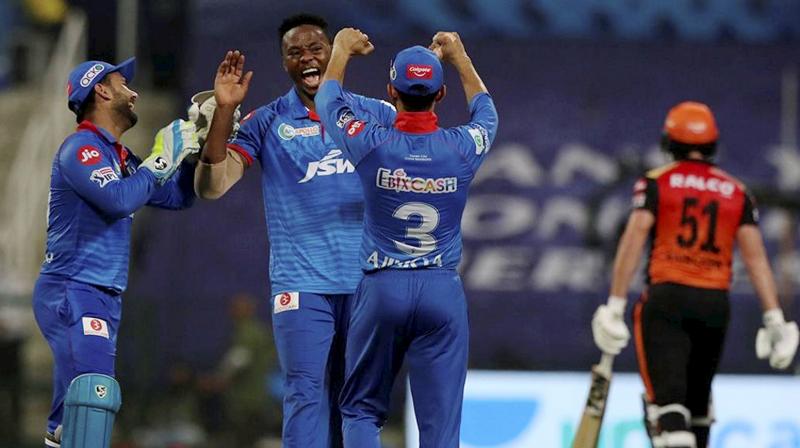 Pace spearhead Kagiso Rabada then led a fine bowling display to end with excellent figures of 4/24, including picking up the big wicket of Virat Kohli.

With 43 off 39 balls, skipper Kohli, who became became the first Indian batsman and the seventh in the world to surpass 9000 T20 runs, was the top scorer for his side.

But the chase master could do little as his team was stopped at 137 for nine.

With the win, Delhi reclaimed their position at the top, having lost only one game in the tournament so far.

Stoinis, who was dropped on 30 by Yuzvendra Chahal, made RCB pay for the mistake as he raced to his 53 in just 26 balls, hitting two towering sixes and six fours at the Dubai International Cricket Stadium.

Shaw, however, missed what would have been a well-deserved half-century.

Chasing a stiff total, RCB were never in the game after losing the wickets of the in-form opener Devdutt Padikkal (4), Aaron Finch (13) and AB de Villiers (9) in the Powerplay to Delhi spinners Ashwin (1/26) and Axar Patel (2/18) and pacer Anrich Nortje (2/22).

Finch (13) got three reprieves. First, Rabada put down an easy caught and bowled chance when the Australian ODI and T20 skipper was on zero. He was again dropped on six by Dhawan off Nortje.

There was another incident involving Finch as he was caught well outside the crease at the non-striker’s end, earning himself a warning from off-spinner Ravichandran Ashwin.  However, the right-handed batsman couldn’t capitalise on his chances.

With RCB reeling at 43 for three, skipper Kohli was joined in the middle by Moeen Ali (11). The duo added 32-runs before Axar broke the stand by getting rid of the England all-rounder.

Earlier, Shaw provided a blazing start, hitting three fours off pacer Isuru Udana in the game’s very first over. His innings was laced with five boundaries and two maximums.

The opening duo of Shikhar Dhawan (32 off 28-balls) and Shaw put up a 68-run stand and looked to go the distance before the RCB bowlers made a splendid comeback.

Mohammed Siraj provided the first breakthrough for his team by removing the dangerous looking Shaw.

After Udana accounted for Dhawan, young Devdutt Padikkal pulled off an excellent catch at the boundary to dismiss DC’s in-form skipper Shreyas Iyer (11).

Stoinis and Rishabh Pant (37) immediately got into the recovery act. The duo stitched an 89-run partnership. Shimron Hetmyer also played a short cameo, the Guyanese hitting a six in the last over.

Siraj (2/34 in 4 overs) was the most impressive bowler for RCB as he picked the key wickets off Shaw and Pant.

After an expensive first over, Chahal pulled things back but couldn’t provide a breakthrough for his team.

Playing in place of Adam Zampa, Moeen Ali (1/21) and Udana (1/40) claimed a wicket each, while Washington Sundar (0/20 in four overs) was the most economical.