Watch: Virat Kohli reveals what he told Anushka Sharma during their first meeting

The 30-year-old is currently the number one ranked ODI batsman and number two ranked Test batsman. 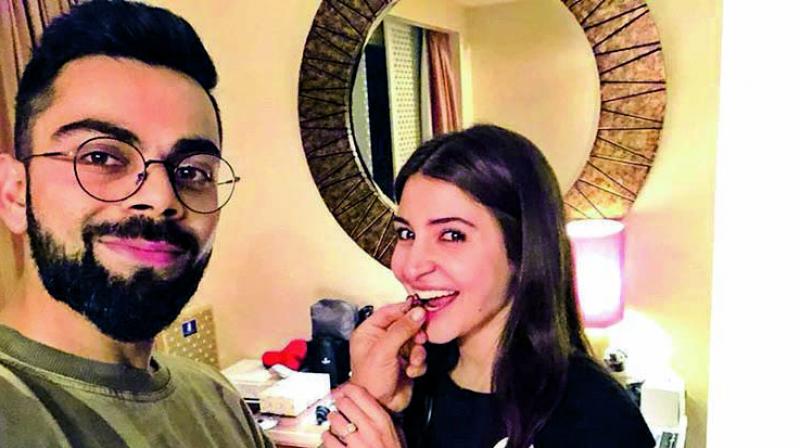 India recently defeated West Indies 2-0 in the two-match Test series, which was a part of the World Test Championship. (Photo: File)

Indian skipper Virat Kohli, who tied the knot with actress Anushka Sharma in December 2017 has revealed the couple's first interaction when they met during a shampoo commercial in 2013.

In a recent interview with American television presenter, Graham Bensinger, the 30-year-old recalled his first interaction with Anushka Sharma and admitted that he was a nervous wreck. To break the ice, Kohli had to crack a joke about the heels that Anushka was wearing.

“I thought I was being funny (when I cracked that joke), and I said something which wasn’t probably the right thing to say. She is tall and she was wearing heels (makes a gesture which isn’t too much) and she was being told that I am not that tall, I am not 6 feet plus or something… she walked in with heels and was looking taller than me and I was like didn’t you get a higher pair of heels,” he further added.

“Then she was like ‘excuse me’ and then I was like ‘no, I am just joking’. My joke became such a weird moment for myself. I was such a fool, to be honest. She was so confident, she is on sets regularly,” he said.

Kohli also spilt the beans on how their relationship developed through the years.

She is also from a similar background as me. We come from middle-class families, made it in their respective careers, worked hard, got to a certain stage. In hindsight, when we look into our lives, they were going at the same pace but in totally different worlds.”

“The timelines of my debut is 2008, the timeline of her starting her first film, shooting for it was 2008 August. We met in 2013 and our lives have been so similar in totally different worlds and then we got along so well. We were talking real things, we were talking things that a lot of people don’t connect with, only if you have seen that life will you understand what we are talking about. So the connect was there immediately,” concluded Kohli.

India recently defeated West Indies 2-0 in the two-match Test series, which was a part of the World Test Championship (WTC).

With this win, Kohli became the most successful Indian Test captain. He now has 28 Test wins from 48 matches and he surpassed MS Dhoni who had 27 wins from 60 matches.

In the series, Kohli had also gone past former skipper Sourav Ganguly to become the most successful Indian captain in overseas Test matches.

The 30-year-old is currently the number one ranked ODI batsman and number two ranked Test batsman.