En route to his 200, the southpaw also broke multiple records. 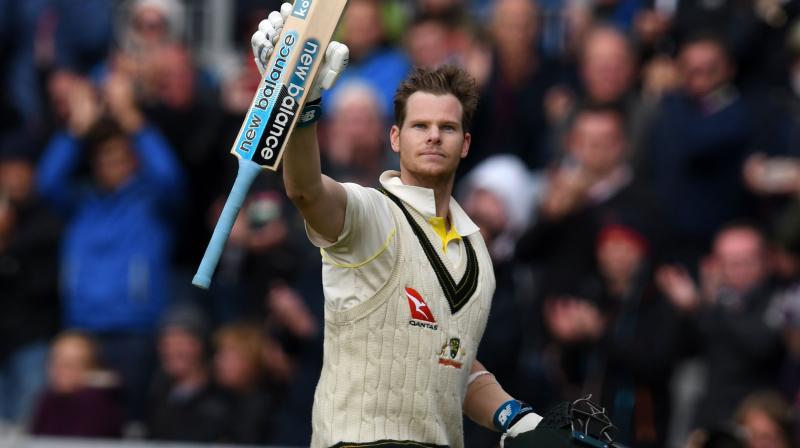 Australian batsman Steve Smith returned to action and took control of the fourth Ashes Test match by scoring a double ton, which put Australia in a strong position against the hosts, England. (Photo: AFP)

Mumbai: Australian batsman Steve Smith returned to action and took control of the fourth Ashes Test match by scoring a double ton, which put Australia in a strong position against the hosts, England.

Smith’s 211 ensured Australia went past 450 to post a daunting first innings total of 497/8. En route to his 200, the southpaw also broke multiple records.

With his 26th century, the southpaw became the second fastest cricketer in the history of the sport to hit 26 centuries in the longest format.

Smith eclipsed Tendulkar to reach the second spot. Smith achieved the feat in 121 innings while the ‘Master Blaster’ reached this milestone in 136 innings.

Moreover, on Thursday, Steve Smith became the second Australian bastman after Allan Border to score 500 and above runs in the five-match Ashes Test series in England.

30-year-old Smith reached the mark after he notched up 122 runs in the current fourth Ashes Test. During the first two matches of Ashes, he already amassed 378 runs under his belt.

Earlier, only Border had scored above 500 runs consecutively in the Ashes in England. During the 1981 and 1985 Ashes series, Border scored 500 plus runs.

Lastly, Smith also became the second batsman to register most Test tons against England, surpassed the record of Garry Sobers and Steve Waugh.

Earlier, both Sobers and Waugh were the joint record holders in the second rank as the duo had hit ten centuries against England from 61 and 73 innings respectively.

After getting hit by a deadly Jofra Archer’s bouncer that forced him to sit out of the third match, Smith came back stronger and stunned the 24-year-old Barbados born bowler and his side to score 211, which put Australia on top at the end of day two.

After Australia lost openers Marcus Harris and David Warner, Steve Smith’s concussion substitute Marnus Labuschagne and in-form Smith steadied the innings as the duo put up a partnership of 116 runs at the end of day one. While, Labuschagne went back to the pavilion after scoring 67, Smith on the other hand, remained unbeaten on 65.

Luck was on the side of Smith as Jofra dropped a catch off his own bowling, when the Test match specialist batsman was on 65. Since then the 30-year-old went to establish eight continuous 50s.

Smith slammed his 26th Test century in 160 balls. Smith continued to dominate England after he and Tim Paine put on another crucial 146-runs stand with Captain Tim Paine who also scored an important 58.