‘I treat every Test as my last’: Hanuma Vihari

Recently, Virat Kohli complimented Vihari for his temperament, which the skipper feels infuses a sense of calm in the dressing room. 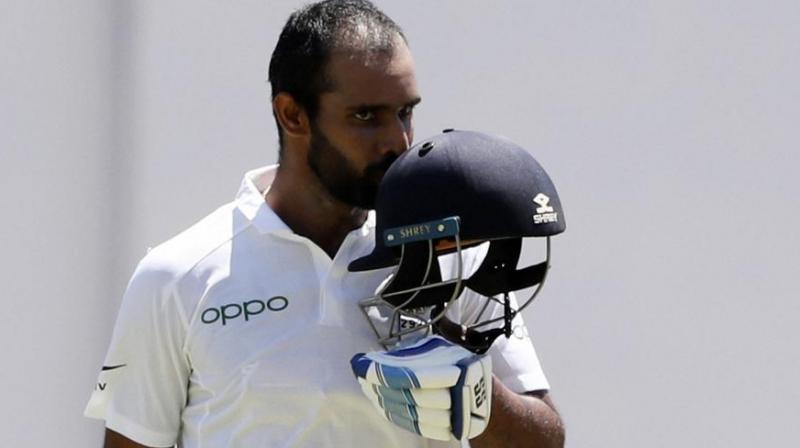 25-year-old Andhra batsman Hanuma Vihari emerged as the top run-getter with 291 runs in India’s 2-0 series win over the West Indies and vindicated the team management’s decision to have him instead of the more stylish Rohit Sharma in the playing XI. (Photo:AP)

New Delhi: Cricketers often talk about how a sense of security helps their performance but not Hanuma Vihari, who believes in treating every Test match as “his last” because it helps him be on guard against complacency.

The 25-year-old Andhra batsman emerged as the top run-getter with 291 runs in India’s 2-0 series win over the West Indies and vindicated the team management’s decision to have him instead of the more stylish Rohit Sharma in the playing XI.

“Obviously I am very happy that I have done well but I went into this tour with a clean slate. I decided to take one Test match at a time. For me, every Test match is my last. It helps me get into a mindset that I have nothing to lose and play accordingly,” Vihari told PTI in an interview.

Recently, Virat Kohli complimented Vihari for his temperament, which the skipper feels infuses a sense of calm in the dressing room. He called Vihari the find of the West Indies tour.

“You can’t ask for anything more if the change room has faith in your abilities. That is certainly the best compliment I could have got and coming from the skipper himself, it can’t get better,” said Vihari, who now has 456 runs in six Tests, including a hundred and three fifties.

But the calm demeanour and steely resolve hasn’t come in a day or two but around seven years of toiling in the domestic arena.

“It has happened because of the years of hard work that I put in at the domestic level. Before playing for India, I had played nearly 60 first-class games.

“I have faced pressure situations at the first-class level. It prepared me for bigger challenges. Thanks to the Andhra Cricket Association and (chairman of selectors) MSK Prasad sir for giving me a chance to play for Andhra,” said Vihari, whose first-class average of 60.30 after 75 games, is among the top-10 of all time.

He feels the USP of his nascent but impressive international career so far has been his ability to take up challenges head on.

“Opening the batting in Australia was more about my mindset. I wasn’t a natural opener and that was the biggest challenge,” said Vihari, about opening in Melbourne, where he blunted Australia’s new-ball attack, allowing Cheteshwar Pujara to consolidate.

“So either I could have just sat and sulked that I am being asked to bat in an unfamiliar position or just accept the challenge and make the best use of the opportunity that I was being given. I decided on the second option” he recalled.

When most of his illustrious colleagues were playing in the World Cup, Vihari was quietly preparing for the West Indies tour doing his homework. In fact, he reached earlier, led the India A side and scored a hundred under pressure (same innings where Shubman Gill scored a double) against Windies A.

“I would say the India A series helped but there is a significant gap between A level and international cricket, just like the gap is even bigger if you take domestic cricket into account,” he said.

“The pitch and conditions for the A games were very different from the Test matches. In Coolidge (Antigua), it was much easier to bat on compared to St John’s. Even Sabina Park was a tricky wicket. It needed a different approach,” Vihari added.

He hails from Hyderabad, but Vihari’s style of batting is quite orthodox, compared to illustrious predecessors like Mohammed Azharuddin and VVS Laxman.

“I always believed in developing a compact defensive game. If your defensive technique is in place, the bowlers at international level will find it difficult to dislodge you. Just being aggressive will always give bowlers a chance,” he explained.

Primarily a front-foot player during his initial days in first-class cricket, the hallmark of his game has been solid back-foot play.

“I have worked on my back-foot game which is a must in international cricket. On bouncy tracks, a good back-foot game helps,” he said. Having reached Hyderabad on Friday morning, Vihari wants to take a week’s rest, before getting back to the National Cricket Academy (NCA) for training in Bengaluru.

Asked if he will play in the Vijay Hazare Trophy for Andhra, he said: “I haven’t yet checked the schedule. If the Test team is announced before the start of Hazare Trophy, I might not play as it won’t make much sense playing white-ball cricket if I have to play Test matches.”

Life hasn’t exactly been a bed of roses for Vihari, who lost his father at the age of 12 but he is grateful for the hard lessons he learnt early on.

“I was only 12 years old and my elder sister was 14 when we lost our father. My mother Vijayalakshmi is a homemaker. Those were hard days,” he remembered.

“My mother ran the household on my father’s pension. Yet, she allowed me to pursue my dreams and not for once did me or my sister feel that we lacked comfort. I still can’t figure out how she even managed,” he got a touch emotional.

But things have changed since he established himself as a first-class player, had his time in IPL and is now slowly making a mark in international cricket.

“Now I have built a house in Hyderabad. I want my mother to relax,” he said.